Last month I partnered with Loot Crate to promote their new subscription box for geeky pets, Loot Pets. They also hooked me up with my own 12-month subscription so that I could unbox and review the contents each month.

Going forward I will upload an unboxing video when I receive my Loot Pets each month and give my first impressions. A couple of weeks later I will write a blog post going over the items in more detail and giving a proper review after testing them out. If you’d like more info on Loot Pets you can check out my introductory post.

If you’re interested in getting a Loot Pets subscription of your own you can head on over to their website and use code PUGLIFE for 10% off.

Now let’s take a closer look at the contents of my January Loot Pets which had the theme “Invasion”. 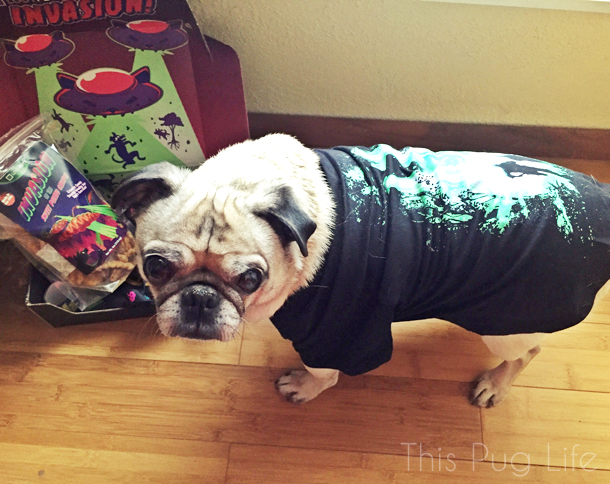 Certainly one of the biggest draws of Loot Pets is the pet apparel. If you get Loot Crate for yourself, a Loot Pets subscription is a must-have for the matching shirts alone. This month the t-shirt had a cool X-Files print, with silhouettes of Mulder and Scully under the bright lights of a UFO.

I had been ordering Pug a large t-shirt because of his barrel chest and non-existent neck. I thought it fit pretty well but realized after shooting my unboxing video that the underside is a bit too long and would very likely get peed on if he wore it during a potty break.I got the size switched for future boxes so I will let you know if the medium is a better fit for a 20lb pug.

As far as quality goes I have no complaints. 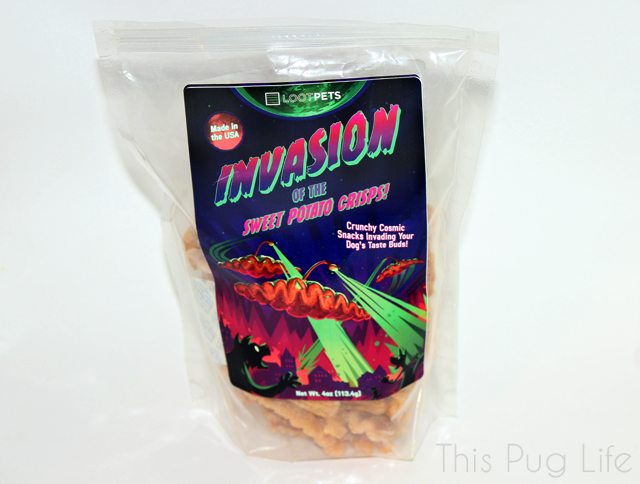 The apparel might be my favorite but the dogs only have eyes for the TREATS. I think they did an awesome job incorporating this month’s theme into the treats. The artwork is on point and the treats themselves really do look alien-like. Obviously the dogs don’t care how well the treats fit the theme, but I appreciate the continuity and attention to detail.

The treats themselves are made in the USA and contain only two ingredients although they are not entirely grain-free this month. This isn’t an issue for my dogs as they aren’t allergic to anything, but something to keep in mind if your dog has an extremely restrictive diet.

I have seen a lot of sweet potato treats in my day but never anything quite like this. They remind me of pork rinds in texture and the dogs sound like they’re munching on potato chips when they eat them, which I find endlessly funny. 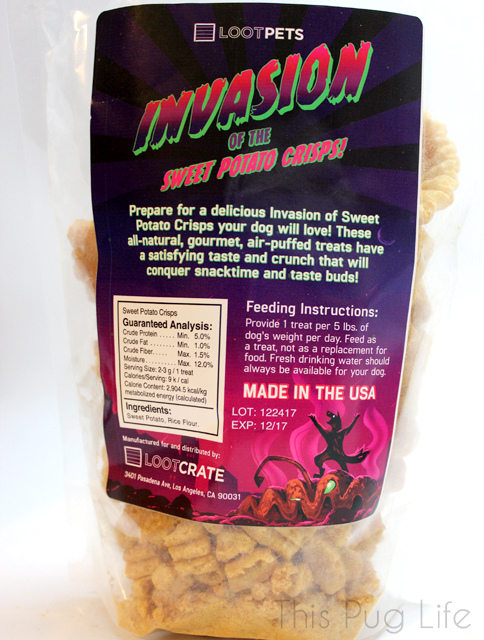 Here’s a shot of the ingredient panel for those interested. I have been extremely pleased with the quality and ingredients of the treats I have received thus far and any longtime readers will know how picky I am about recommending food/treats! 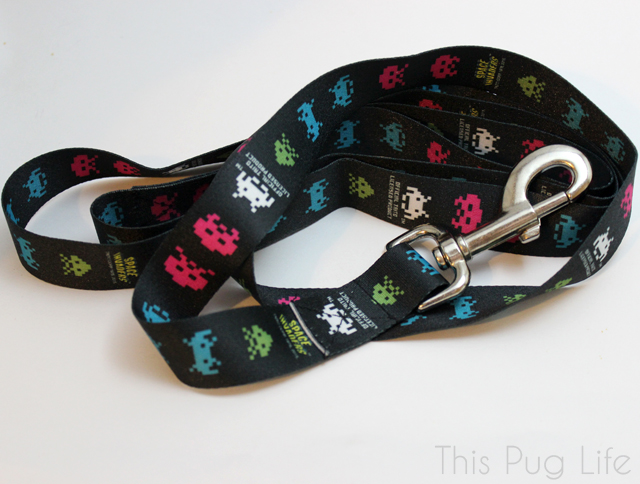 Next up is this adorable Space Invaders leash. There isn’t a whole lot to say about it but it’s definitely cute, gender neutral and seems to be good quality. The fabric isn’t super thick, so we will see how durable it turns out to be over time. My dogs aren’t very rough on their leashes but if you have a chewer you’ll definitely want to keep a close eye!

It’s a standard 6-foot leash but again, the theme is great and I definitely don’t mind having an extra leash on hand. I hope to see more functional items like this in future boxes! 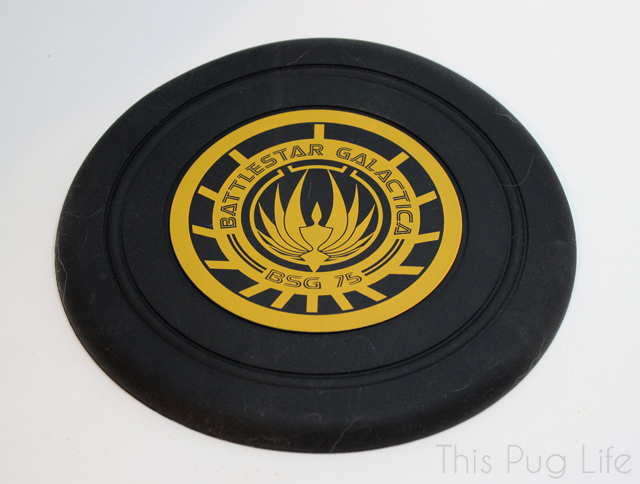 This was my least favorite item in this month’s box. I am a fan of Battlestar Galactica but this frisbee didn’t really wow me. To be fair, neither of my dogs have any interest in frisbees so that certainly effects my judgment. Though, with any kind of box like this you’re going to end up with some items that aren’t a good fit for you and your pets. That said, this frisbee was pretty small and floppy. So besides the BSG logo it’s nothing too special. 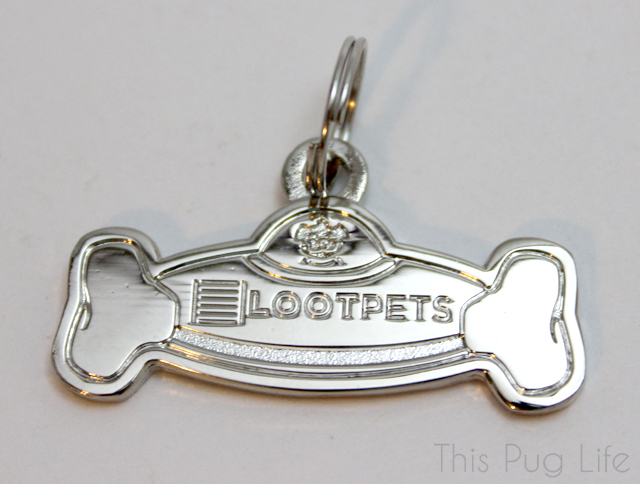 We received a “Founding Pets” spaceship dog tag in the very first Loot Pets box and I didn’t realize there would be a new one in every box. It’s a little thing but I actually think these are a sweet keepsake item. They’re blank on the back so you could probably have them engraved if you wanted to use them as an actual dog tag too. 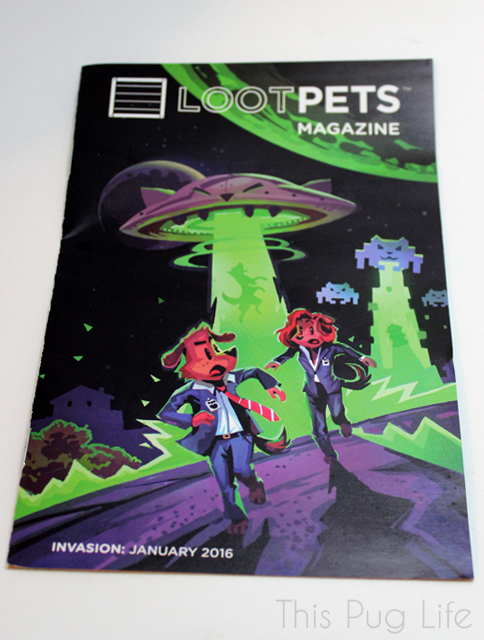 Last up is the Loot Pets magazine. Now, the pamphlet that comes in the box obviously isn’t the main draw, but I actually think they’ve done a great job with it! Last month’s pug astronaut cover will always be my favorite but the artwork is really good regardless of breed featured. I plan on cutting off the pug cover and putting it in a frame. This month’s canine Mulder and Scully being chased by a feline UFO is definitely frame worthy if you’re a big X-Files fan.

I just can’t say enough good things about the artwork throughout the box. It’s a small thing that really makes the whole experience. And Loot Pets if you’re reading, I think people would totally buy larger prints of these covers. Just saying!

Oh yeah, the actual content of the magazine is pretty good too. More info about the items you received plus a small article called “Pets in Pop Culture” that features pets from movies/TV/games that match this month’s theme. Again, it’s a small thing but makes the experience that much more enjoyable. Who doesn’t like a little reminder of Gizmo the gremlin or Boomer from Independence Day (I stand by my proclamation that Boomer’s tunnel scene was one of the scariest of the whole movie!).

That’s it for January. I’ll be back in a couple of weeks with my review of the February Loot Pets box, which has a “Dead” theme. Subscribe to my YouTube channel to see my first impressions as soon as my Loot Pets arrive.