I’ve had a couple of weeks to test out the goodies inside my February Loot Pets so it’s time for a full review. My initial unboxing video with first impressions is below. If you’d like more information about the Loot Pets subscription box I explain it here.

Once again Loot Pets was timely with their “dead” theme this month with Deadpool and new episodes The Walking Dead both premiering in February. 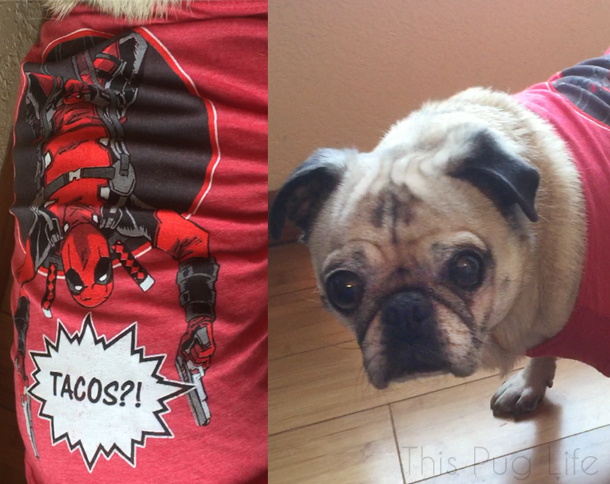 First up is the t-shirt of the month. Once again this Deadpool t-shirt is an exact match for the t-shirt included in the Loot Crate subscription for humans. I mentioned last month that I was going to switch Pug to a medium shirt because the large was a bit long on the underside and he would probably pee on it. I didn’t get it switched in time for February so next month I should be able to report if medium is a better fit.

Loot Pets does have a nice sizing guide but pugs are tricky because they have large chests but aren’t very long. He was just barely in the medium category for chest size but I was afraid it would be too tight, but we will see. I’d prefer it being snug over getting peed on! 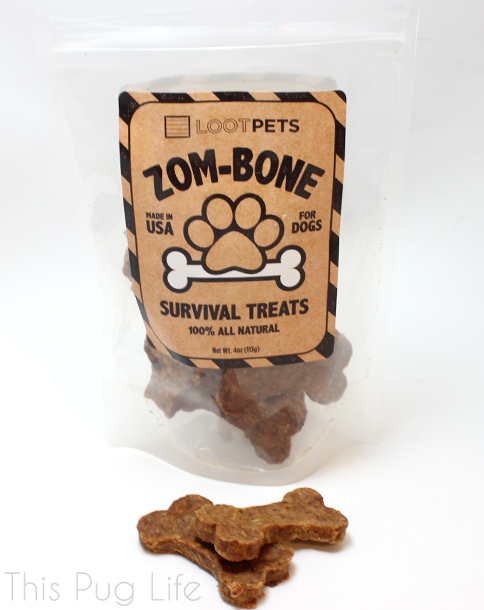 This month the dogs were thrilled to receive TWO types of treats! I really like the theming on the Zom-Bone Survival Treats and the dogs loved eating them. I forgot to take pics of the ingredient panel this time so I’ll list the ingredients below.

As always the treats are made in the USA. These chicken bones had the feel of a soft jerky, but in a bone shape. And since they’re limited ingredient these should be appropriate for most dogs! 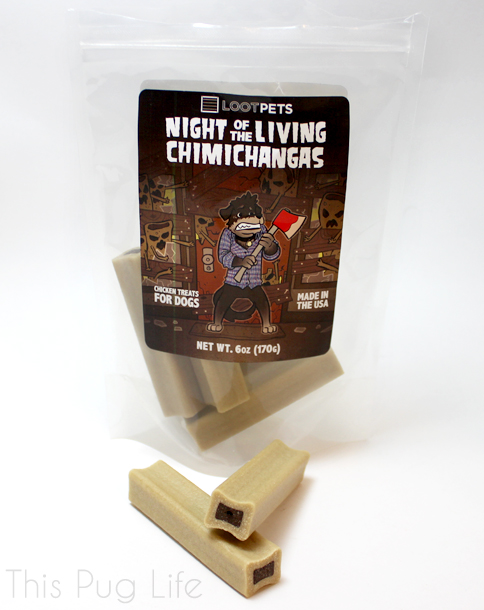 Again, love the packaging here. The Night of the Living Chimichangas reminded me a bit of Busy Bones. They’re fairly hard and seemed like they were supposed to be a longer lasting chew. They also really smell but naturally that just made the dogs love them even more. These aren’t super limited ingredient so if your dog is on a strict no-wheat diet you’ll have to pass them along.

While I feed my dogs grain-free for their main diet, they don’t react badly to grains and they can eat these just fine. I will say that although they looked long-lasting it only took them a few minutes to devour. They’re also fairly small which is a fine size for Pug (20lbs) and okay for Molly (40lbs), but if you have a larger dog these would be no work at all.

I would say that the one-size fits all of the treats and toys in Loot Pets would be my main criticism. I realize it would be a lot more work for Loot Pets, but those with larger dogs would get a lot more out of their subscription if the items were appropriately sized. Just a suggestion if any Loot Pets employees are reading! 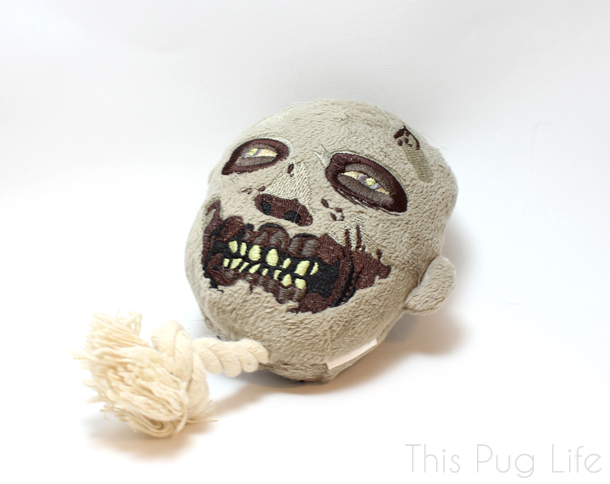 This Walking Dead Zombie toy was a big hit with all of us! I am a big zombie fan in general and an avid The Walking Dead watcher. Pug likes plush toys he can “kill” and then suck on like a pacifier (weirdo, I know) and this fit the bill.

But again, I think everyone got the same size toy regardless of the size of their dog. I realize that some of these items may only come in one size since they are officially licensed merchandise and Loot Pet exclusive items.

Personally, I would like to see them branch out beyond officially licensed items while staying on theme. Now maybe that’s not what their target demo is looking for, but it’s something that occurred to me after receiving my first three boxes. I know of a brand that makes adorable zombie toys and in different sizes. They just wouldn’t have The Walking Dead AMC tag on the back.

Just one woman’s opinion, but I’d rather have better quality items that fit the theme but weren’t officially licensed. As we all know, often times companies will slap a logo on anything and call it a day (the Battlestar Galactica frisbee from last month comes to mind). 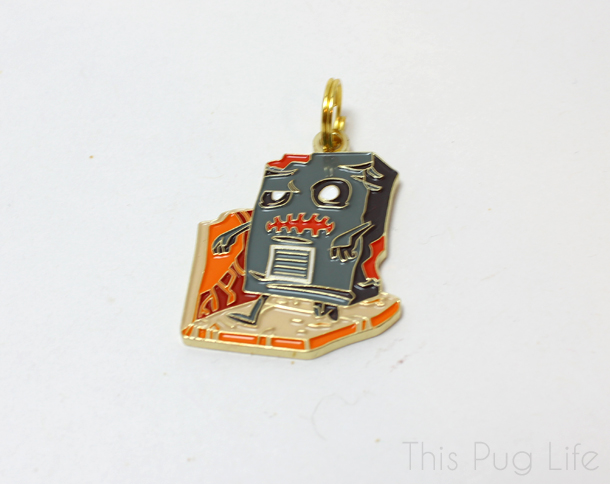 This month’s dog tag is actually the same design as the Loot Crate pin for February – a zombified Loot Crate. I guess it’s a zombified Loot Pets in this case. The dog tag is a small, extra item but I think they’re a cute keepsake. Plus, I don’t see why you couldn’t use them as an actual dog tag if you engraved the back which is blank. 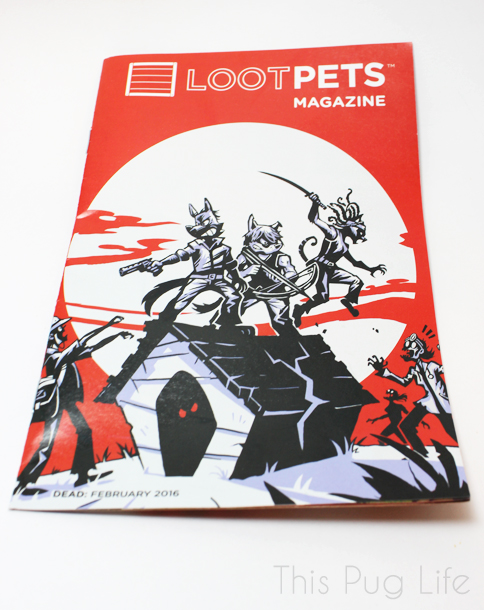 And last up is the Loot Pets magazine for February. With an awesome canine The Walking Dead scene. I’ve said it again and again, even though the magazine is not the draw of the box the artwork is amazing. I’ll never love another as much as the pug astronaut but I have loved them all. I definitely feel like the magazine covers are keepsakes in their own right. 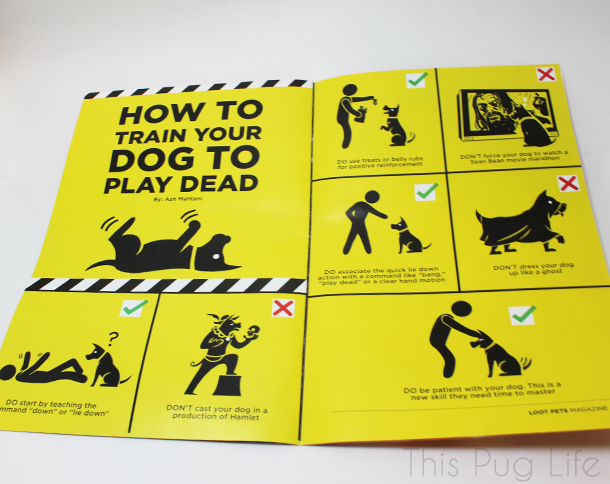 Plus, they do have some cute features inside. This month there was a funny instruction manual for teaching your dog to play dead. I love how their team ties the theme into absolutely everything!

And that’s it for February’s “Dead” Loot Pets. Even though I did have some constructive criticism, this was definitely my favorite box so far both as a theme and items received.

Check my YouTube channel later this month for my unboxing of March’s “VS” Loot Pets and check back here for a full review!