My week(s) in iPhone photos and video. Make sure you’re following me on Snapchat (ThisPugLife) for more silliness throughout the week. 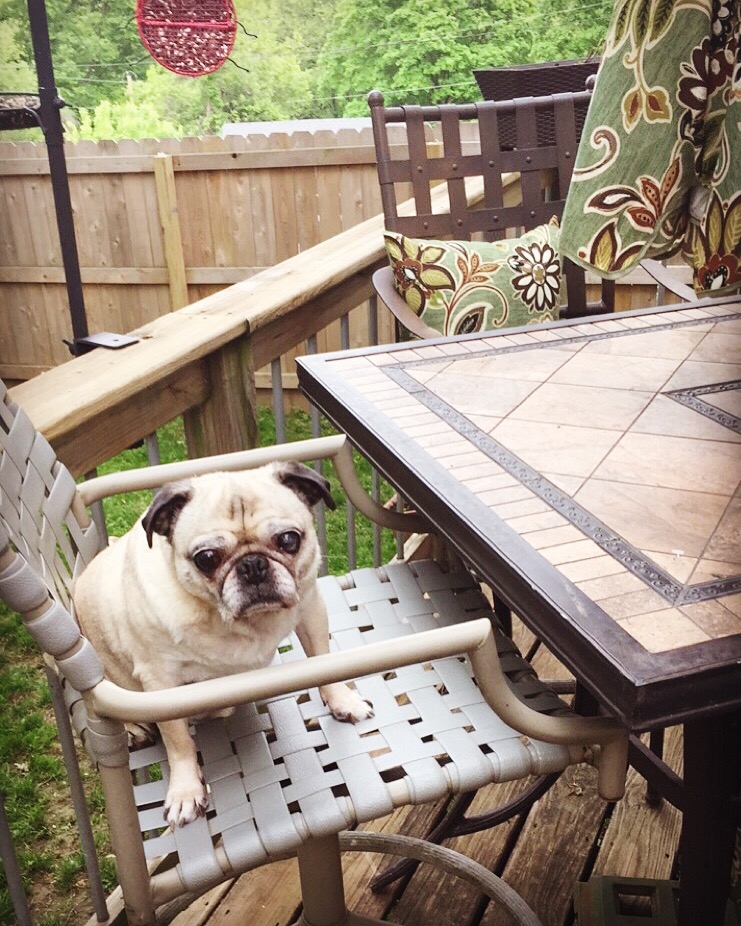 We’ve been spending a lot of time on the deck lately. I often bring my laptop out there to work during the day. Naturally, Pug takes a seat at the table. He can’t sit on the ground like a common dog. 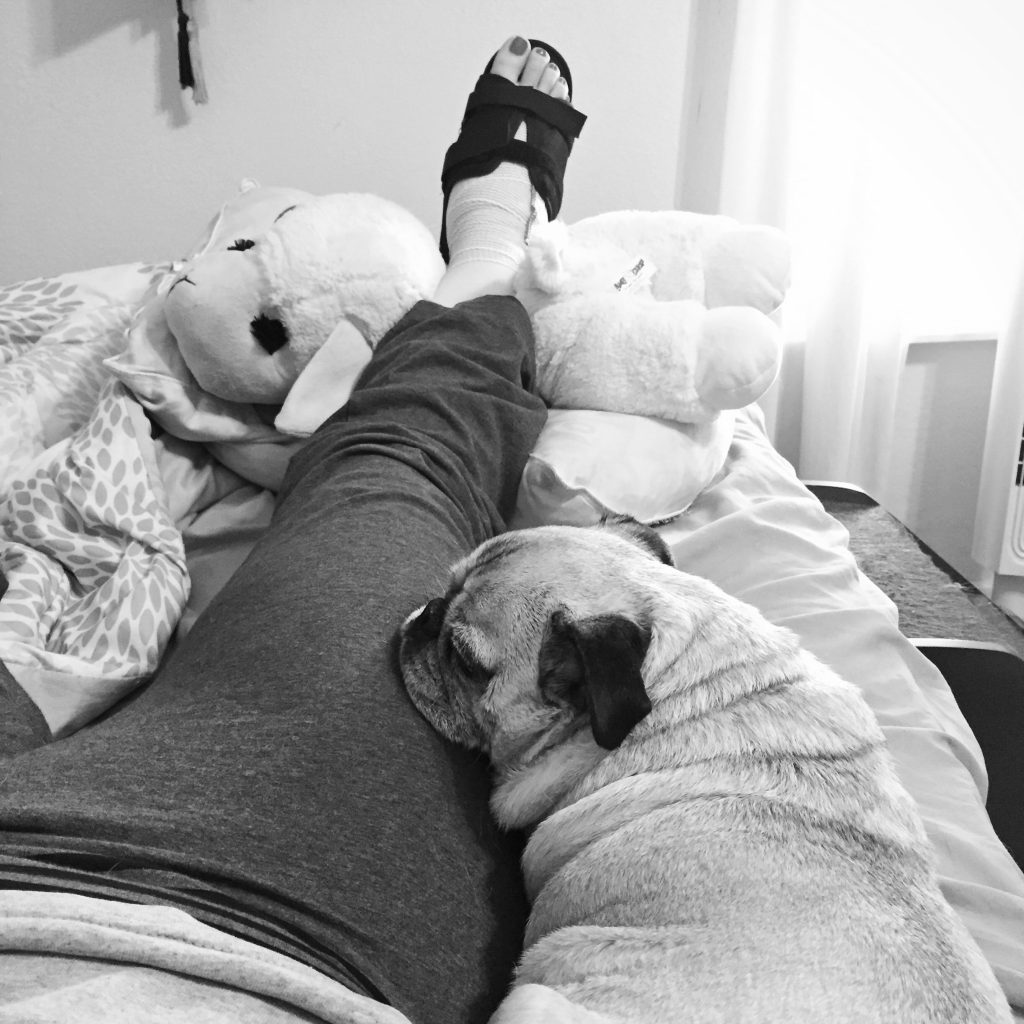 As you may know, I have arthritis in my foot/ankle joints from steroids I took years ago for my Crohn’s. The pain in my right foot has gotten progressively worse over the years. Wanting to put off a fusion of my ankle as long as possible, my doctor did a minor surgery to remove a bone artifact he thought was bouncing around and irritating the arthritic joint. 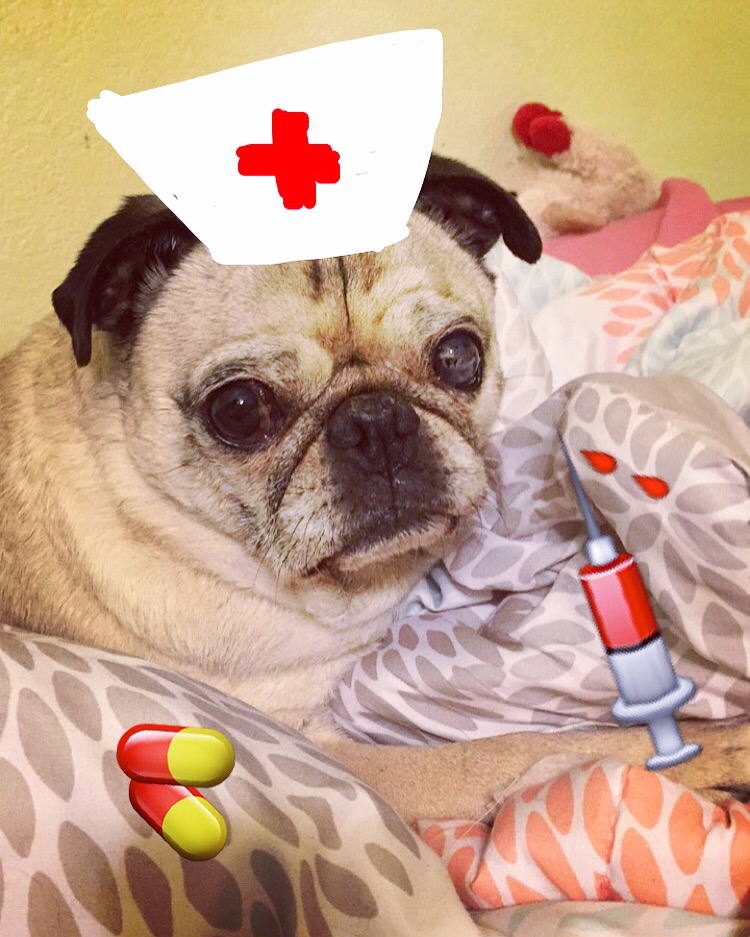 I spent the first few days post-op laying in bed watching Netflix and my Pug Nurse was by my side the whole time. 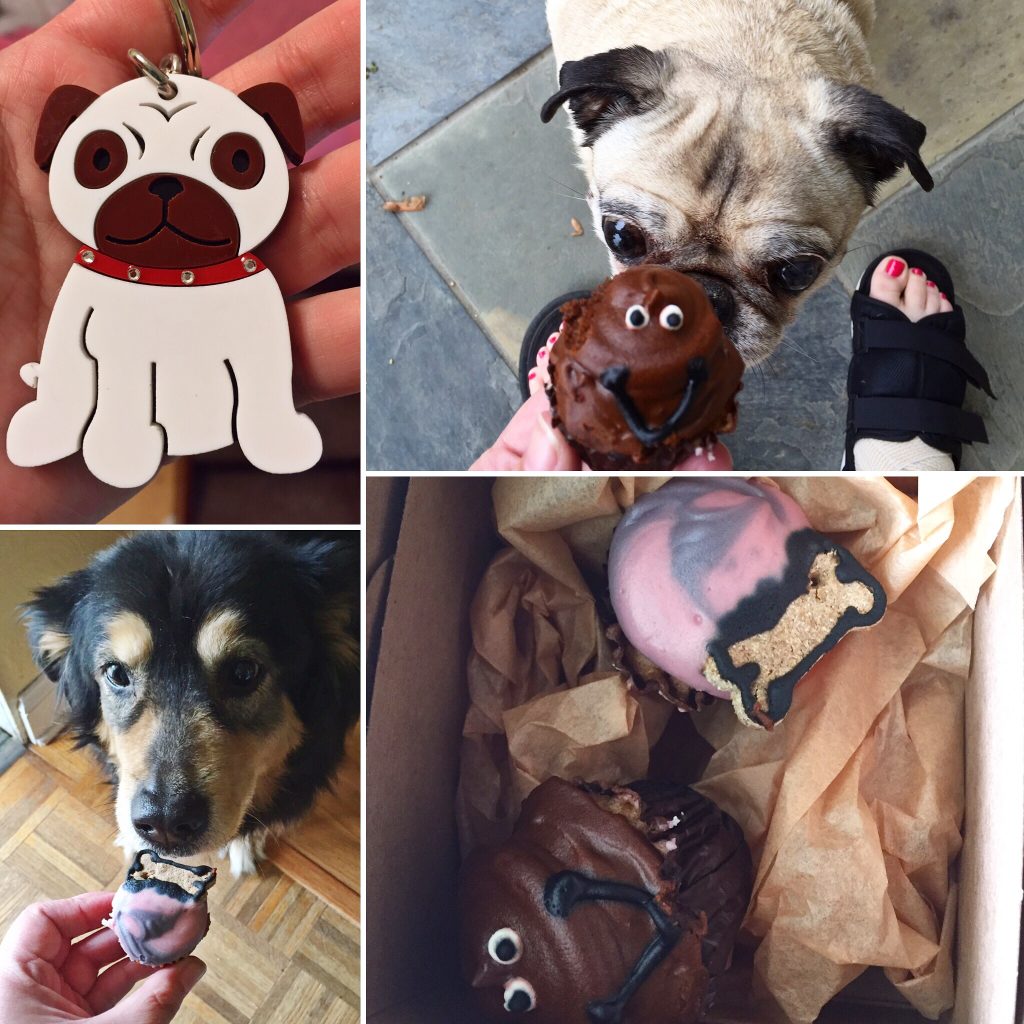 After my first post-op appointment I swung by a new dog bakery that opened up nearby. I got myself a pug keychain which is now hanging on my purse, and a mini pupcake for each dog.

Obviously I had to get Pug the poop emoji pupcake! 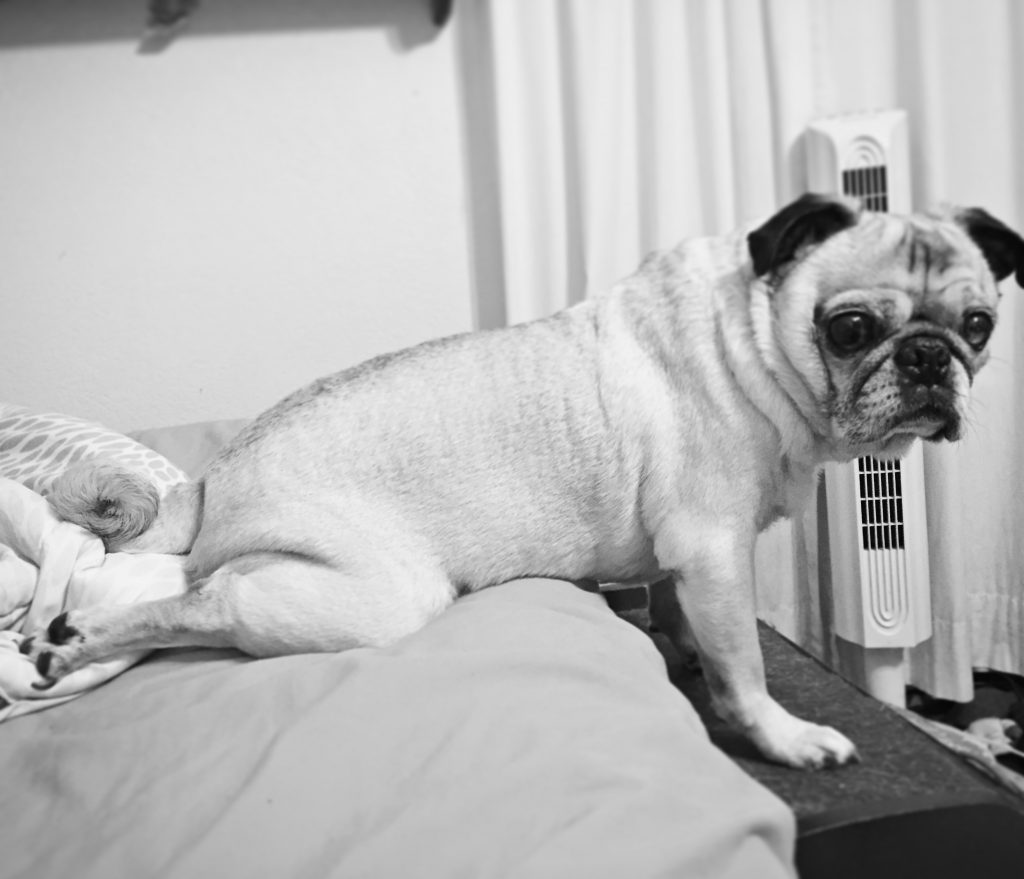 Is that a Pug or a seal pup?

I was playing music through my Bluetooth in the car, and I didn’t realize when I Snapchatted that the music would replace the video’s sound. So, instead of Pug screaming it looks like he’s singing with Britney. 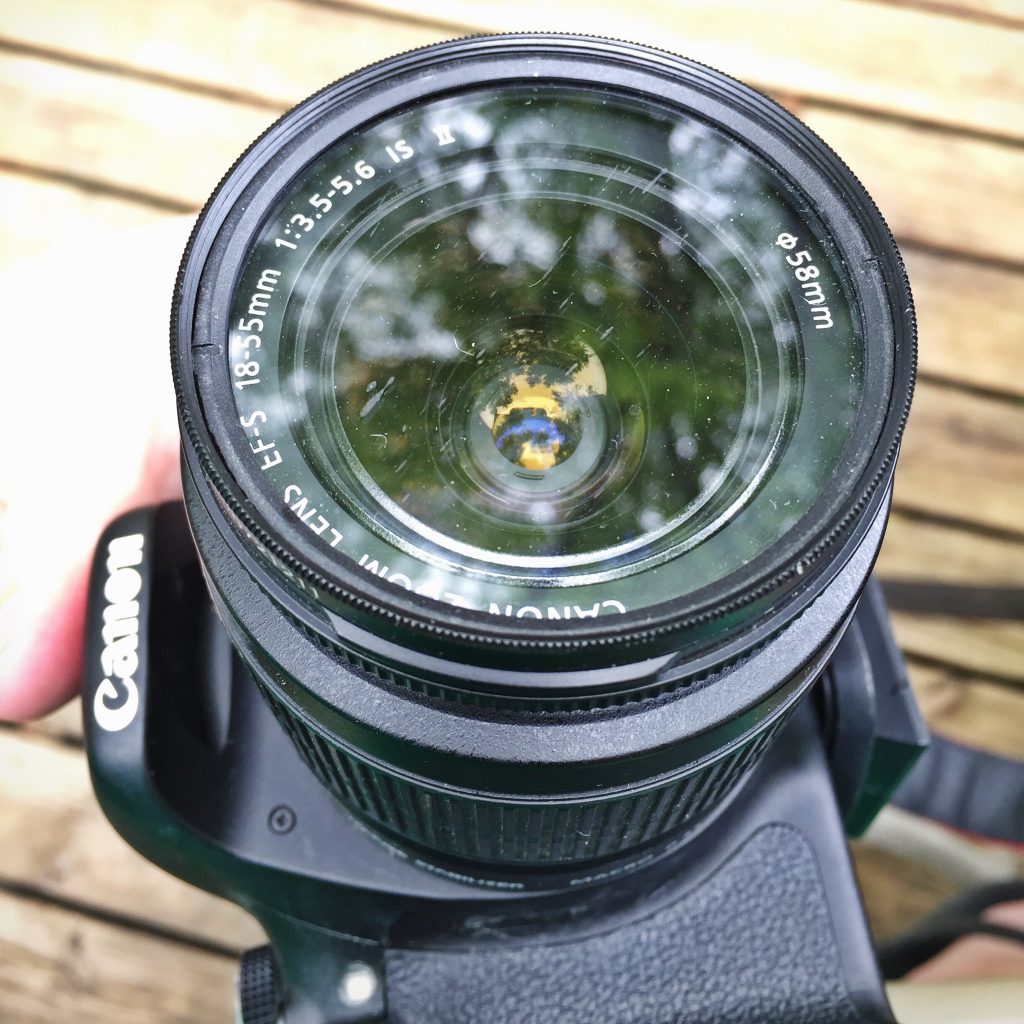 Typical. After a photo shoot with Pug the lens is covered in sneeze! 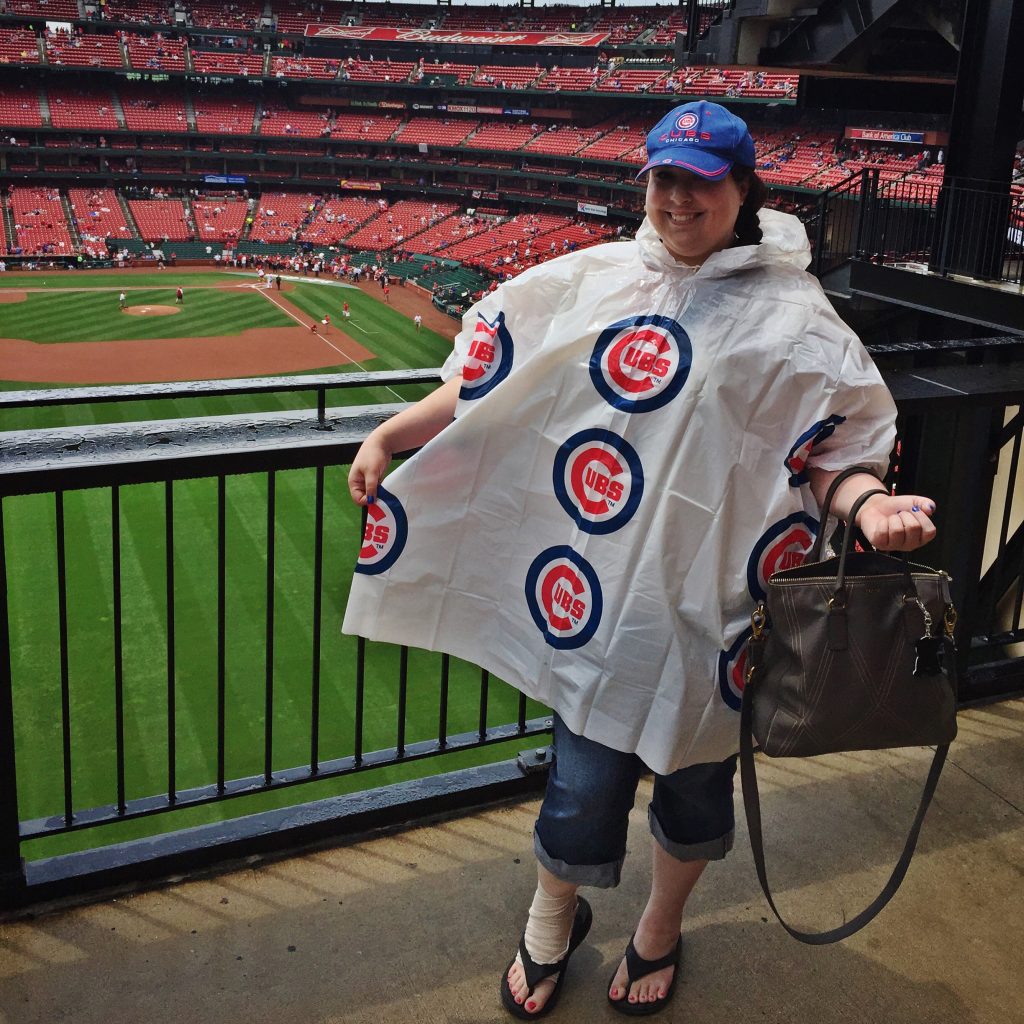 Story time. When I was younger and watched the Cubs on TV I was always jealous of the people in their Cubs ponchos during rain delays. I mostly get to see the Cubs play when they come to St. Louis and obviously they only sell Cardinals ponchos (as IF). So my first trip to Chicago I got myself my very own rain poncho. That was at least 10 years ago. I’ve held onto this thing all that time. It’s never been opened. A few times there’s been the threat of rain but it never came to pass.

Wednesday, there was a 100% chance of rain just before the game was set to begin. Just a few blocks away it started pouring. Other people on the bus starting getting their crappy generic ponchos on. THIS WAS IT! I busted open my poncho and put it on, I was elated. It was finally happening!

But traffic was really bad, and we were practically crawling to the stadium. By the time we got to the drop-off point the rain had slowed to a drizzle and the sun was trying to come out. The poncho was completely not necessary but it got a few rain drops on it so I’m calling it properly christened, finally. 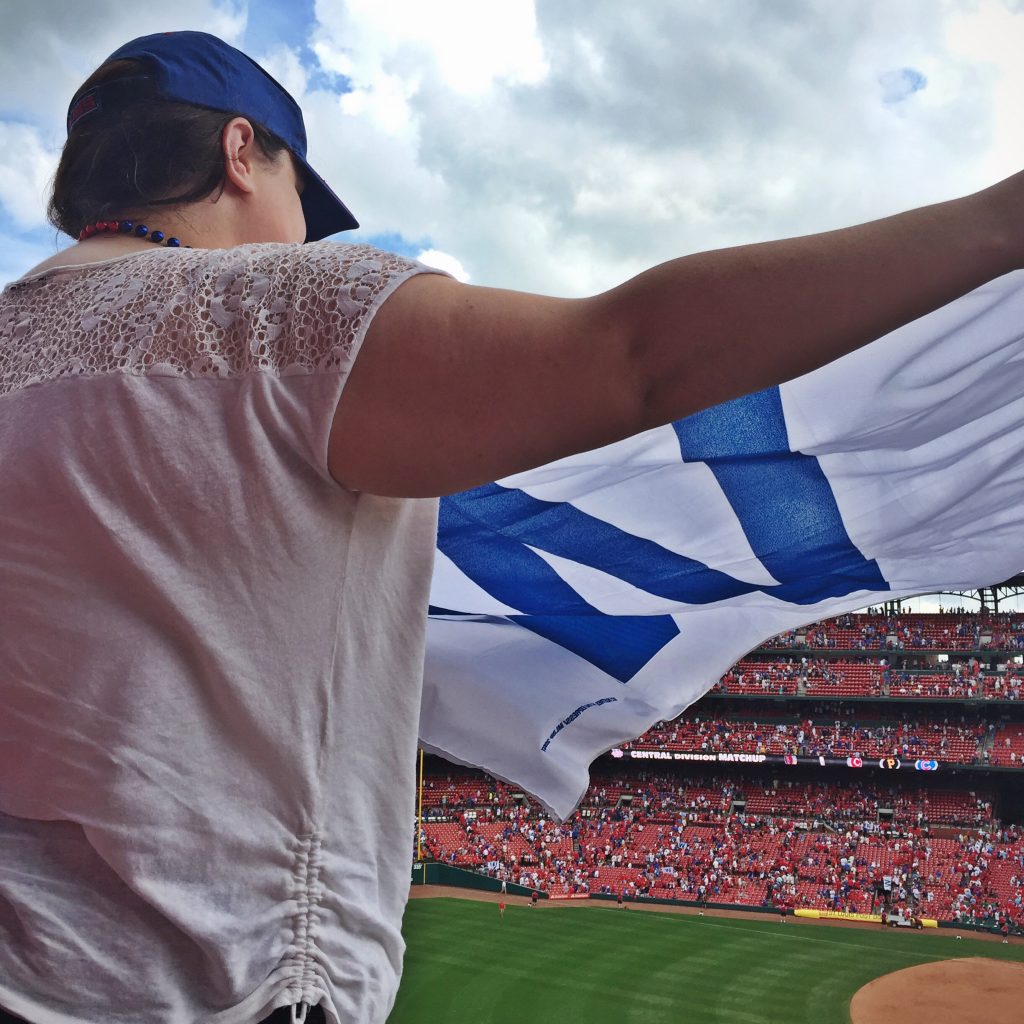 My W flag has gotten plenty of use over the years but I’ve never gotten to fly it at a game. It got much too close for comfort but my boys pulled it off in the end. It was so awesome looking around for other W’s flying and waving at each other in solidarity.