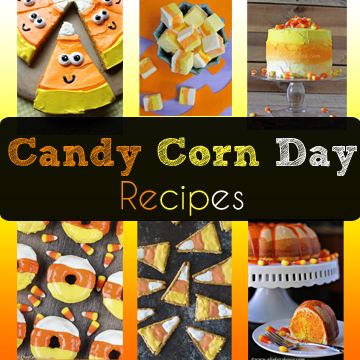 You can start Candy Corn Day bright and early with these baked donuts from Chez CateyLou. This icing technique will take three times as long but is 100% worth it.

I’ve seen candy corn colored bundt cake before but this one from A Baker’s House features a candy corn glaze. So, if you don’t like candy corn flavor you can skip it but if you’re me – bring on the liquefied candy corn!

Speaking of hot chocolate, these candy corn hot chocolate on a stick from Your Home Based Mom would make adorable party favors. Since they’re made with candy melts, they will taste more like white hot chocolate. If you’re a candy corn fan (raises hand) you can throw some on top with the marshmallows.

The candy corn colored icing layers on this cake from Joann’s looks impressive but would be fairly simple to accomplish.

If your piping skills need some work, this Ombre Candy Corn Cake from Rose Bakes is even simpler to achieve.

If you need a break from all the sweet treats, this Cheese Bread Candy Corn from Hungry Happenings should hit the spot. I could totally see myself making some “candy cornbread” in that adorable Wilton pan myself!

For a sweet and salty mix, we turn to candy melts again to make these Candy Corn Pretzels from The First Year.

This Payday Caramel Corn from Shugary Sweets offers a lot of sweet with a little salt to keep it from being over the top. Candy corn mixed with peanuts is often called “Payday Mix” (and it does indeed taste like the candy bar). I’m a big fan of Fiddle Faddle (caramel corn mixed with peanuts) so I assume I’d like the addition of candy corns as well.

If I’ve learned anything over the years on Pinterest it’s that melted down candy corn is the basis for anything homemade Butterfinger. So, why the heck not melt them down and use it as a dip? That’s just what Real Housemoms created with this Slow Cooker Candy Corn Fondue.

There are so many delicious layers to these Mini Candy Corn Pinata Cake Pop Cones from Lady Behind the Curtain. Tasty cake pops made with candy corn frosting. Dipped in candy corn candy melts. And placed on top of a mini cone filled with surprise mini candy corns!

I admit. I was totally drawn to the Candy Corn Pumpkin Cookie Pizza from Munchkin Munchies because of the cute little googley eyes. It would be a really cute dessert without it, but it’s absolutely “squee” worthy with the face.

Every year I try to feature a candy corn alcoholic beverage. This year, I found a candy corn drinking vessel. Simplistically Living has filled their Edible Candy Corn Shot Glasses with candy corn whip (yum) instead of booze. But, I bet you could add a little something boozey to the whip and these would turn out similar to pudding shots (yum again).

And if you need even more candy corn inspiration, check out my roundups from previous years!
Tasty Candy Corn Treats for National Candy Corn Day 2015