I own two fish, a Black Molly and a Platy. I don’t know their sex, but I figured I was safe since they’re not the same species. So, imagine my surprise when I was doing routine cleaning yesterday and discovered this: 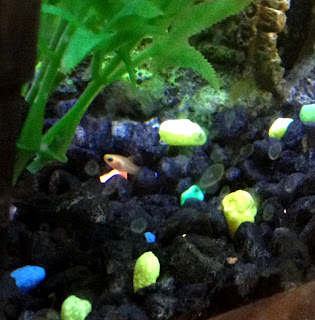 What the hell? I’ve had these fish for four months, so I don’t think I bought it pregnant. I didn’t think they could breed together. My boyfriend has taken to calling it Mutant Super-Fish and thinks it’s just great.
During my failed attempts last year at keeping fish from Petsmart, I was sold two male Dalmation Molly’s. Or so I thought, until I came home to a tank full of babies.
“They’ll eat the babies”, Petsmart told me. Only, they didn’t.
“Well, if you don’t want them you can just… dispose of them”, Petsmart told me. That sounds like a pleasant way to spend an afternoon…
I eventually got a manager to agree to exchange my female and her babies.
Now, I assure you I bear no hatred toward infant fish. It’s just that I have only a 10-gallon aquarium. It can’t sustain that many bodies. This new guy is just one teeny fish. But, he’ll grow. He might try to make more babies. Then it’ll be 101 Dalmation Molly all over again.