I’ll start with the positive stuff. ie: Not Goodwill Outlet.

My favorite Salvation Army Thrift Store finally moved to a new location. I kind of miss the old, scary basement location – it felt like an adventure every time we went shopping.

Anyway, I didn’t find anything here I had to have, but this gem definitely warranted a picture. 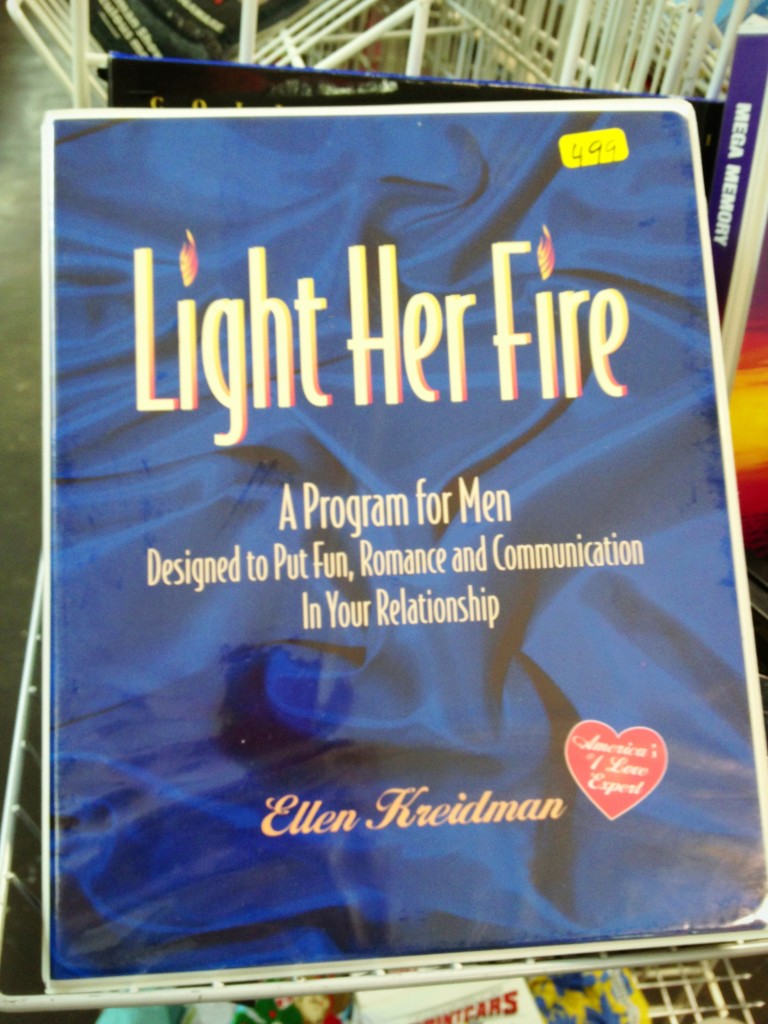 At $4.99 it seemed kind of steep, but I guess “lighting her fire” really is priceless. 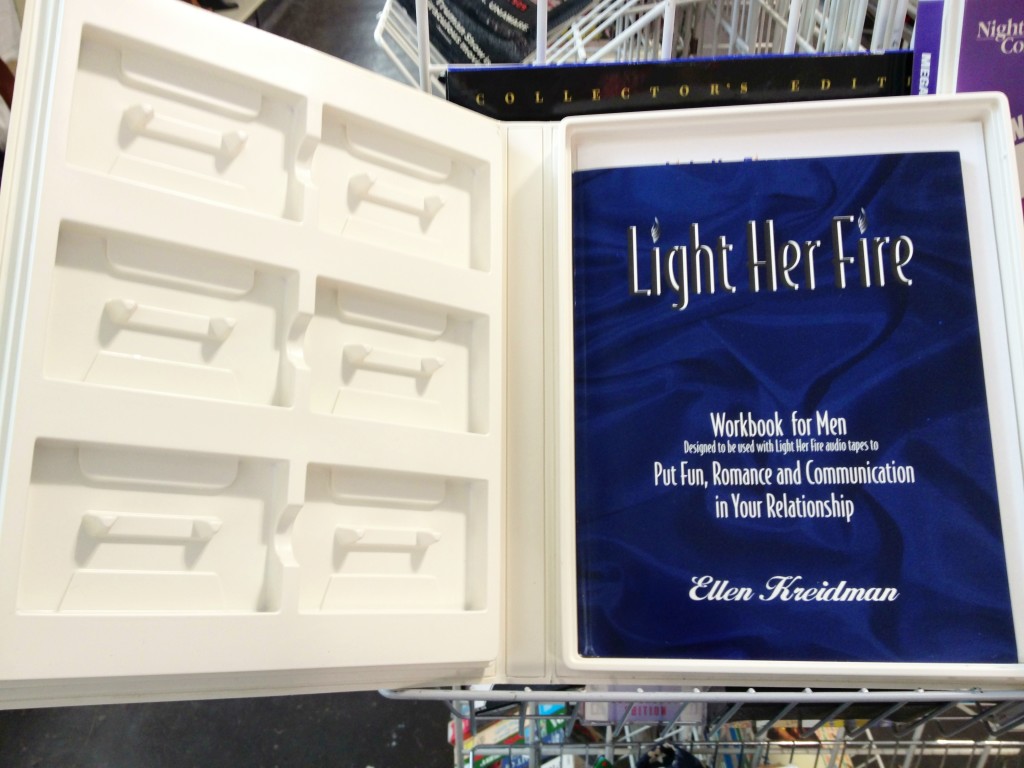 All 8 cassette tapes were missing! $4.99 for just the workbook and none of the lessons. I never.

I did find some goodies at the next stop, Goodwill (not the outlet, that’s still to come). I’ve been looking for lamps to put in our living room for months. I didn’t care about the color since I intended to spray paint them, but as much as I looked I never found a pair that I liked. Only single lamps.

So, when I found these, I was pretty excited. I will probably spray paint them a fun color at some point, but for the time being they will work as-is. 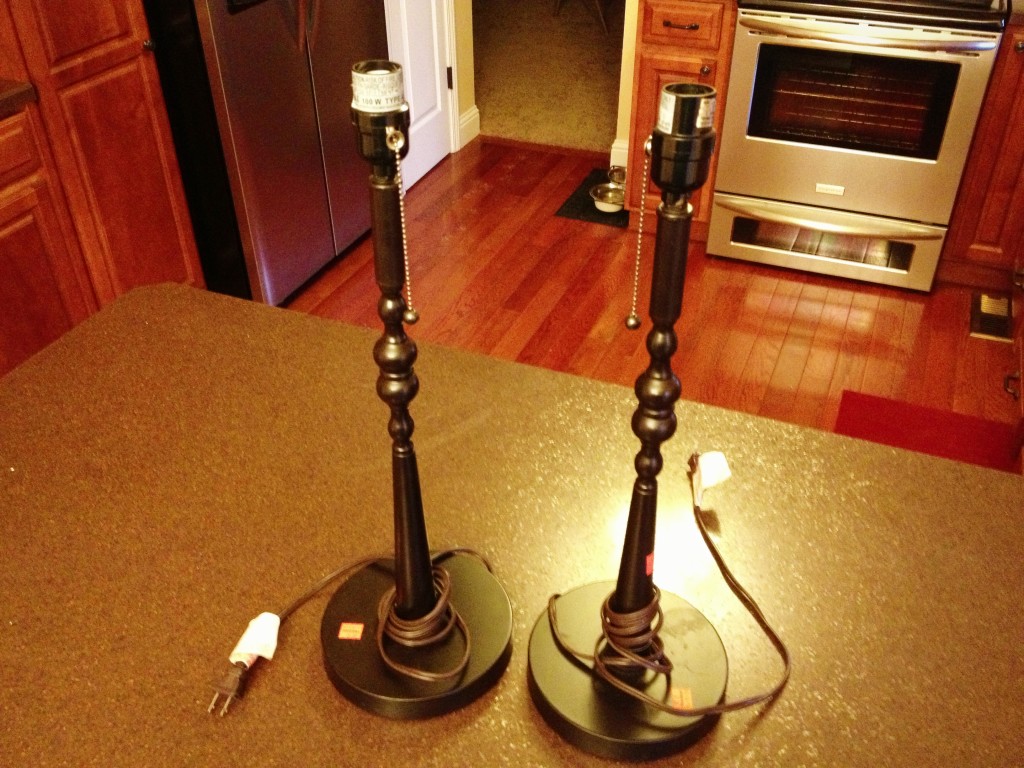 Now, onto the Goodwill Outlet. I have heard some crazy stories about this place. As much as I love a good thrift store, I really didn’t plan on going out of my way to check it out, especially after hearing of fistfights breaking out.

But, I was with friends on Saturday and the outlet was on the agenda, and I was up for an adventure.

I definitely got what I asked for.

If you’re not familiar with the Goodwill Outlet, basically, it’s stuff that didn’t sell at a regular store that is rolled out in large, mostly unsorted bins. At the St. Louis location everything (except furniture) is sold by the pound. I think this varies by location though.

First,  I noticed that a lot of employees (and many shoppers) wore goggles, gloves and surgical masks. I didn’t come prepared with safety gear, so I mostly looked through the bins without touching much. Some of the items I noticed mixed into the bins included broken glass, knives and two diapers.

The furniture was all on sale on Saturday for $2. It was really too expensive at that price. I’m all for keeping things out of landfills, but I think some of this furniture was actually a biohazard. It smelled like sewage.

The employees do a lot of screaming and are really hostile. Which, is kind of understandable based on the way people behave, but also really off-putting if you’re just casually looking around.

My friend warned me that when they bring new bins out, there is a stampede to get to it first. It was kind of like those Black Friday videos from inside Walmart, except instead of $3 toasters people are fighting over broken stuff and dirty shoes. I pulled out my iPhone and took a video of one bin coming out and the people going nuts over it.

I didn’t intend to do anything with it, but minutes later I was approached by an employee who threatened to escort me off premises if he saw my phone out again. I was really shocked and confused. It seems there is a sign prohibiting recording at Goodwill Outlet. One sign. In the entire warehouse. Which I eventually found posted as I was leaving the building. I’m not a jerk, if I had known I wouldn’t have done it. It just didn’t occur to me it wouldn’t be allowed. I’ve been thrifting for years and I take pictures of weird stuff all the time and have never had a problem. And I’m pretty sure the now infamous Thrift Shop song was actually filmed in a Goodwill Outlet.

So, like I said. I didn’t plan on doing anything with the video. But, since I almost got thrown out over it, I decided it was definitely going on Youtube.

To be fair, from searching a little, it looks like not all Goodwill Outlets are this God awful. But, I will definitely never be back to the St. Louis location and I really can’t recommend anyone else visit it either, unless you just want to see the spectacle for yourself. If you do, make sure your tetanus vaccine is up to date.