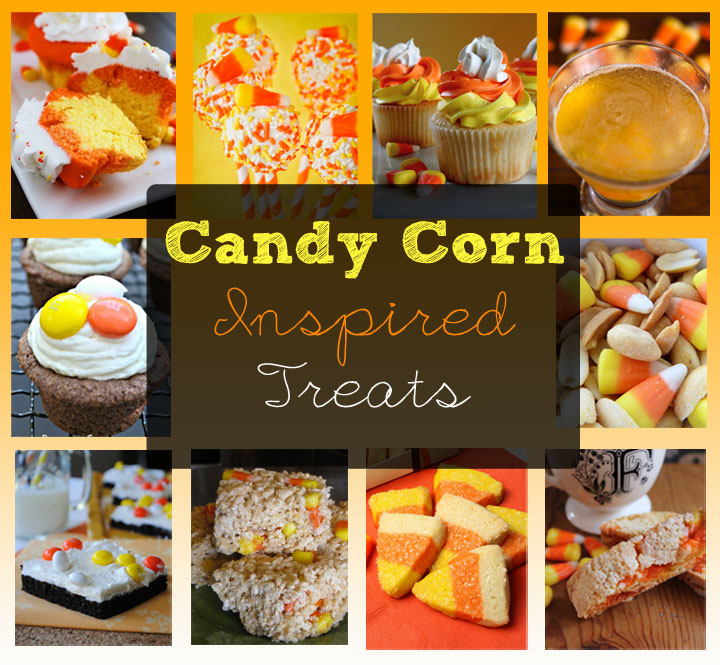 Candy corn is probably the most iconic, and divisive Halloween candy in existence. Whether you love it or hate it, it  is synonymous with Halloween. With that in mind, I’ve compiled several of my favorite candy corn treats from around the web. If you happen to hate the flavor of candy corn, fear not. Not all the treats are candy corn flavored.

As for me, I love candy corn. But, I only buy and eat it during October. And it has to be Brach’s brand. I’ve tried others and they were dry and crumbly instead of soft and sugary. Blech. I also think limiting it to a once a year treat keeps me from getting sick of it. 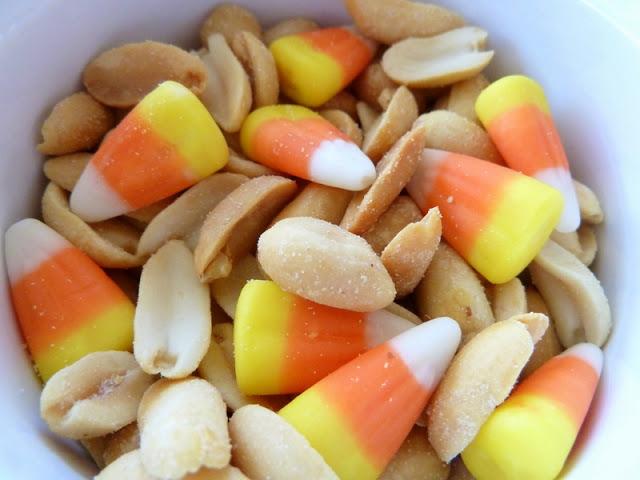 This is not really a recipe, but I had to include peanuts and candy corn, sometimes called Pay Day mix. The good part about this mix is that since candy corn is so overwhelmingly sweet, the peanuts help cut the sweetness. The bad part is, I find candy corn self-limiting because it’s so sweet. Adding in the peanuts allows me to eat more than I should! 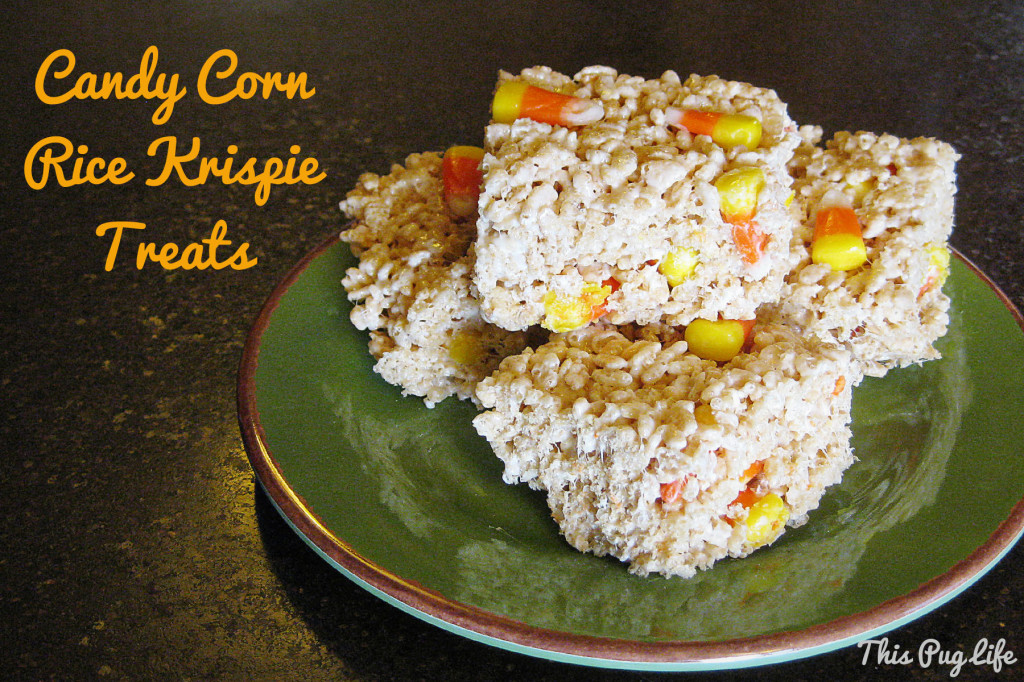 Next on the easy scale are my very own Candy Corn Rice Krispie Treats. Again, it’s barely a recipe. Almost a decade ago I was trying to think of a last-minute Halloween treat for a party. I decided to dump some candy corn into a batch of Rice Krispie treats. To my surprise, people went crazy for them. I continued to give out my “recipe” online over the years and people thought it was great, so despite its simplicity I decided it deserved its own blog post. 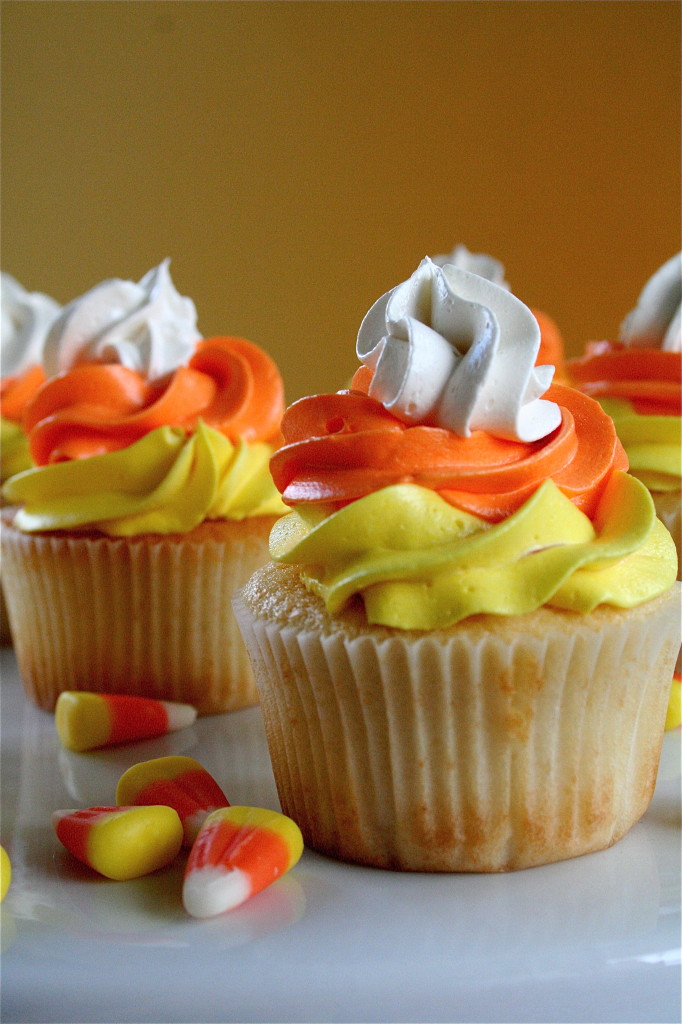 These cupcakes are right up  my alley. I’m a cupcake purist. White (or preferably chocolate) cake with simple buttercream frosting. These have the bonus of looking like an adorable giant candy corn. If I were making these, I’d probably use a round icing tip, instead of a star tip. 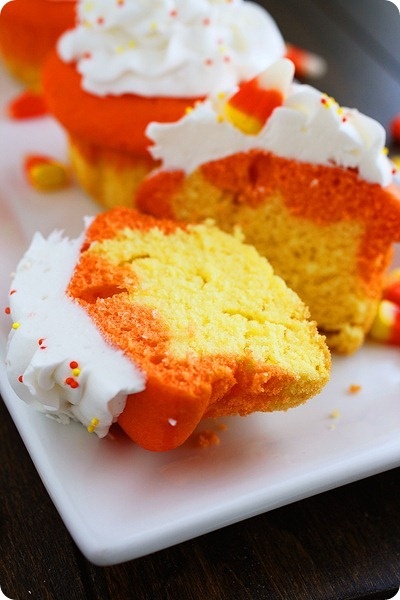 Source: The Comfort of Cooking

This version of candy corn cupcakes gets a little fancier. Instead of just using candy corn colored icing, the cake itself is dyed as well. I love that from the top, they look like a really simply frosted cupcake. But, when you look closer you see the candy corn detail throughout. 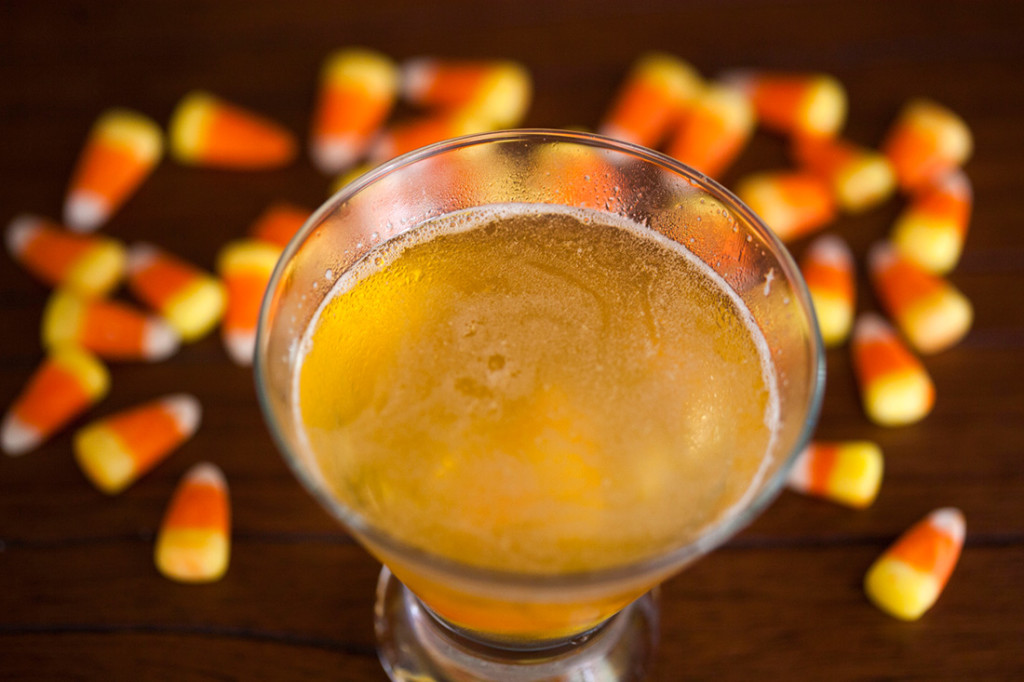 Out of all the treats featured, this Candy Corn Martini is probably the most likely to get a look of revulsion from the candy corn haters. And to be honest, I’m not sure I wouldn’t find it disgusting either. But, I feel like I just have to try it at some point in my lifetime. It’s kind of bizarre, yet totally necessary. 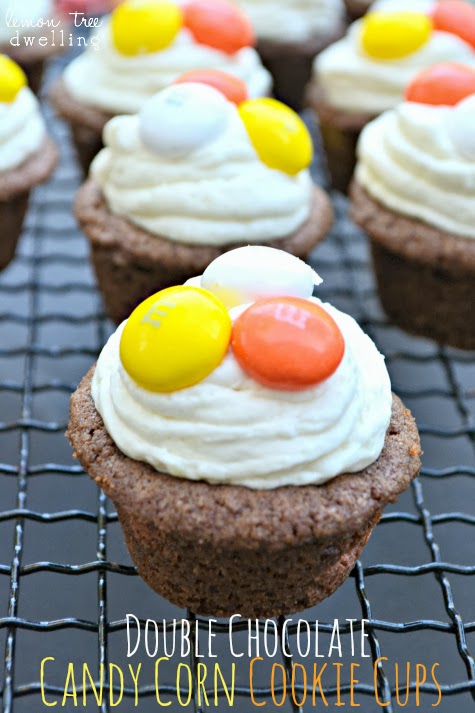 I’m not sure what I can say about these Double Chocolate Candy Corn Cookie Cups. I feel like the title alone should say all that needs to be said. Candy corn inside. Icing. Candy corn M&M’s on top. Perhaps it’s the time of the month talking, but nothing about these sounds bad to me right now. 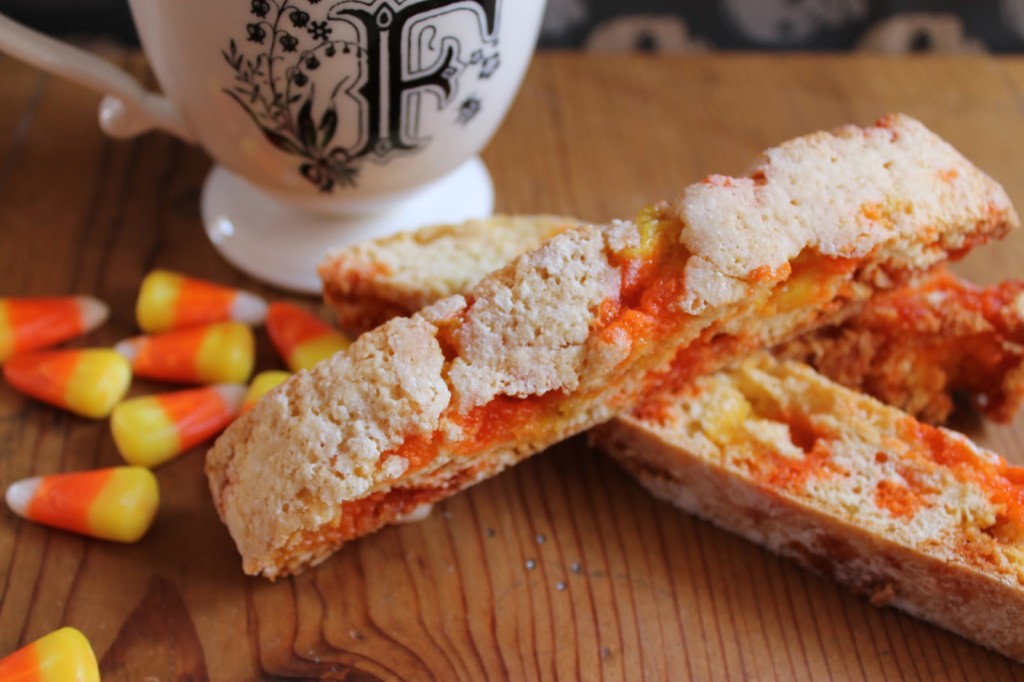 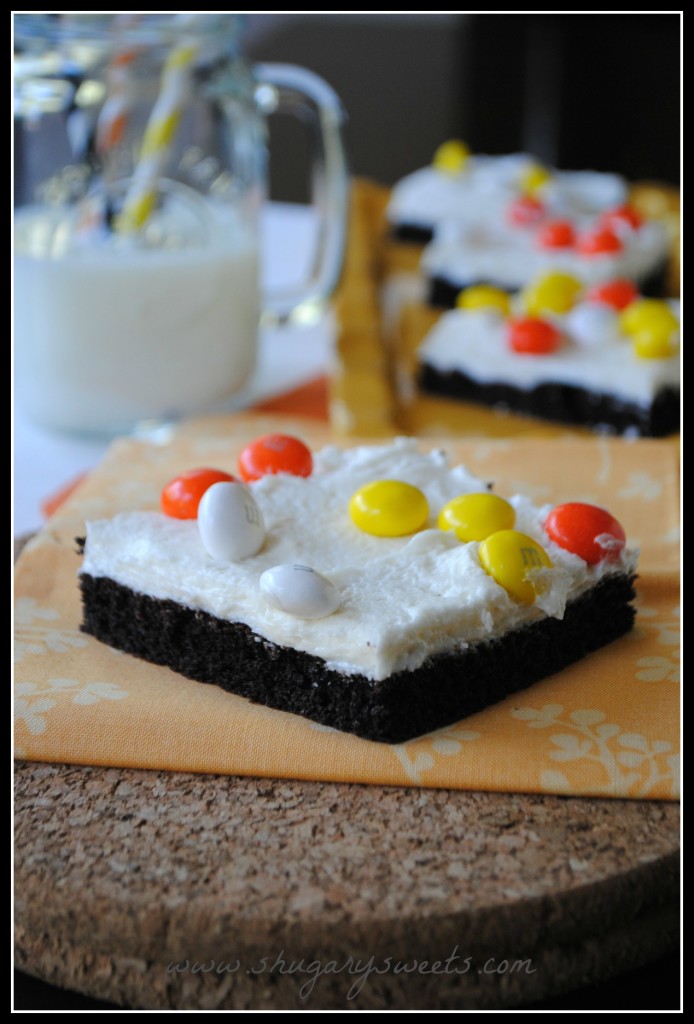 I mentioned above that my favorite type of cake is chocolate cake with white icing. So, when I saw these Candy Corn Cake Bars, my first thought was “get in my mouth”. Not only do they look delicious and festive, they’re versatile. You could use the candy corn M&M’s as shown (I’ve never tried these by the way, do they still make them?) or use actual candy corn. Or, you could change it up entirely and use sprinkles or other candies for an entirely separate event. 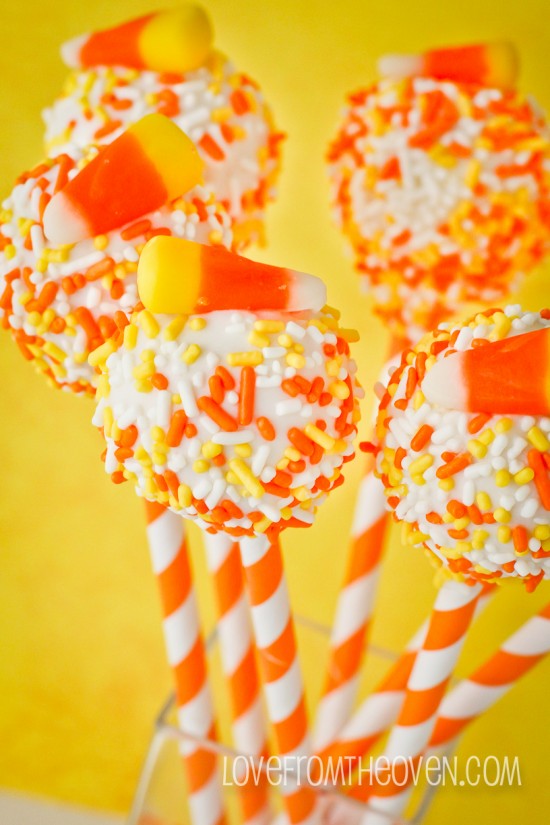 Source: Love From The Oven

Like the cupcakes above, these Candy Corn Cake Pops are dyed candy corn colors on the inside. But, they hit the cute trifecta by also being on a stick and rolled in color coordinating sprinkles. Fact: everything tastes better with sprinkles. Fact: treats are immeidately cuter when placed on a stick. 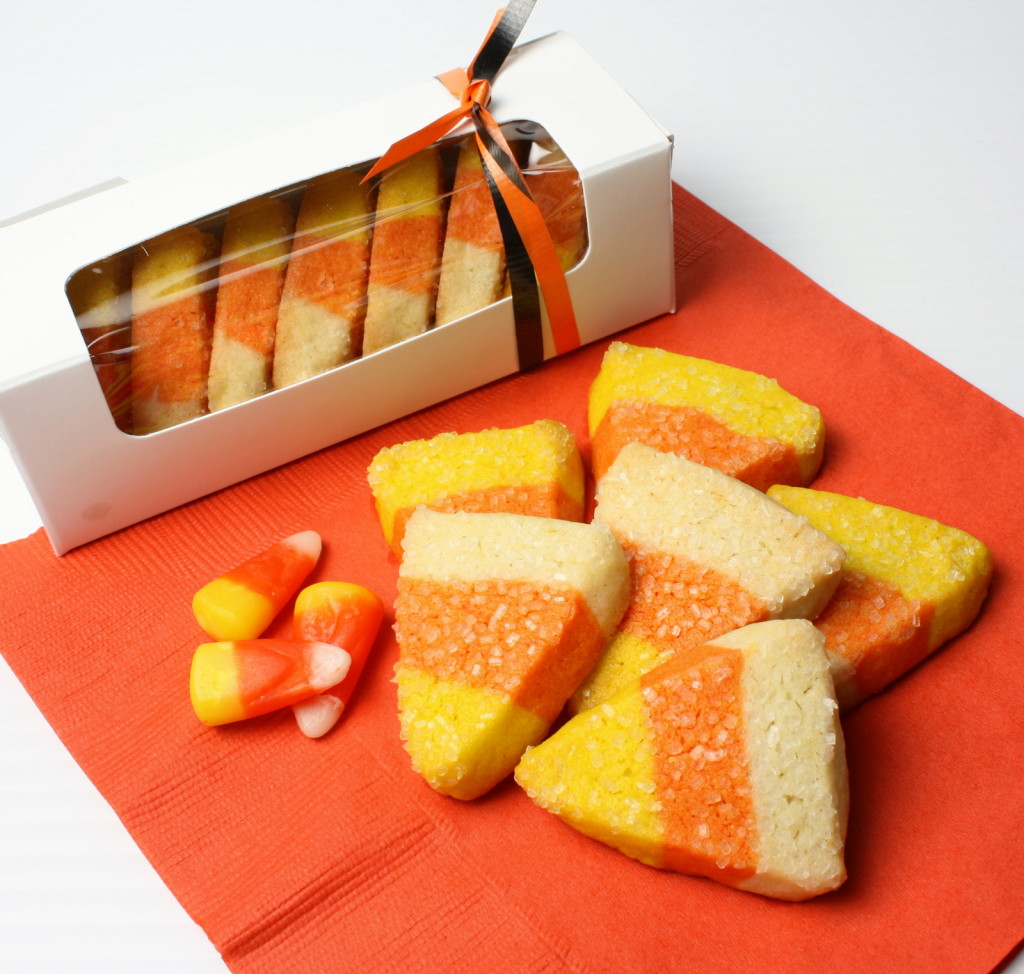 What I love about these Candy Corn Cookies, besides being festive and presumably delicious, is that they look really complicated while actually being simple to prepare. The stacking and slicing technique used to get the color and shape is ingenious. Plus, these cookies are a great way for everyone to enjoy some candy corn goodness regardless of how they feel about the actual candy.