For dog bite prevention week I thought I would share my personal dog bite story. I never really mentioned it in detail on the blog because at the time it was extremely traumatic and I wasn’t really ready to sit down and share – Pug was injured (mild injuries), I was injured (not so mild) and all without having health insurance at the time to add to the trauma. Now, almost 3 years later I think it’s finally time I did, along with tips about how you can prevent a dog bite like mine.

A few months ago I wrote a dog bite prevention post in response to the Sarah Palin dog scandal happening at the time. Rather than rehash those general tips, I wanted to research and share tips on safely breaking up a dog fight without getting injured since that is how I received my bite. Through being involved in rescue and speaking with a lot of other pet owners, I have discovered that this type of incident is much more prevalent than you may realize.

A few years ago I was visiting my mom with Pug in tow. During my stay, she let her dogs in from outside and within seconds, her pit bull mix grabbed and attacked Pug. Now, because it happened so suddenly it seemed to happen without provocation, but I realize now there may have been that we just didn’t realize. Now, pugs pretty much have no shot in a fight with any breed of dog – they barely have teeth. So, seeing my baby getting attacked I reacted without thinking and did the number one thing you’re NOT supposed to do – put my hand near the dog’s mouth.

In my panicked brain, I attempted to pry his mouth open with my bare hands. As my mom’s dog adjusted his grip, his teeth came down on my index finger. I screamed, which fortunately startled him into releasing Pug. It wasn’t until I ran to the sink that I realized the tip of my index finger was missing. I won’t share photos (although I do still have them) of the injury, but I will show pics of the dressing I had to wear for several weeks, and how my finger looks now. 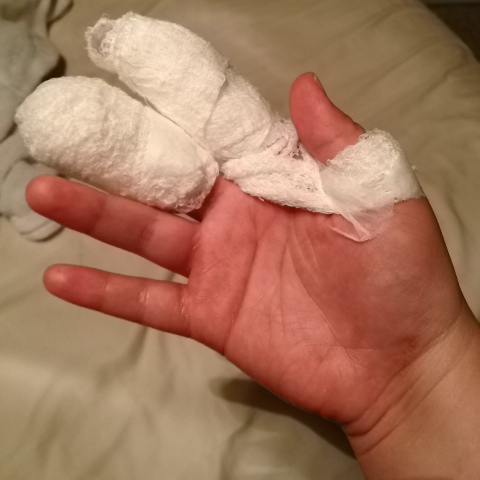 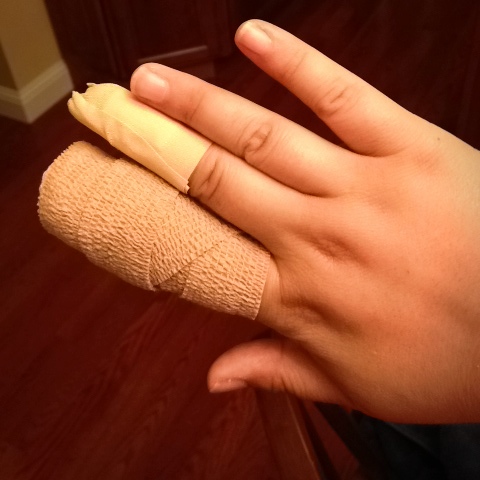 Because we didn’t have the tip to reattach, and because it was a small portion missing, my hand doctor/plastic surgeon actually decided just to let the wound heal and fill in on it’s own. As you can see, from the front you really can’t notice anything is wrong with it. It’s only when I hold it up next to my left finger that you can see my right one is shorter. 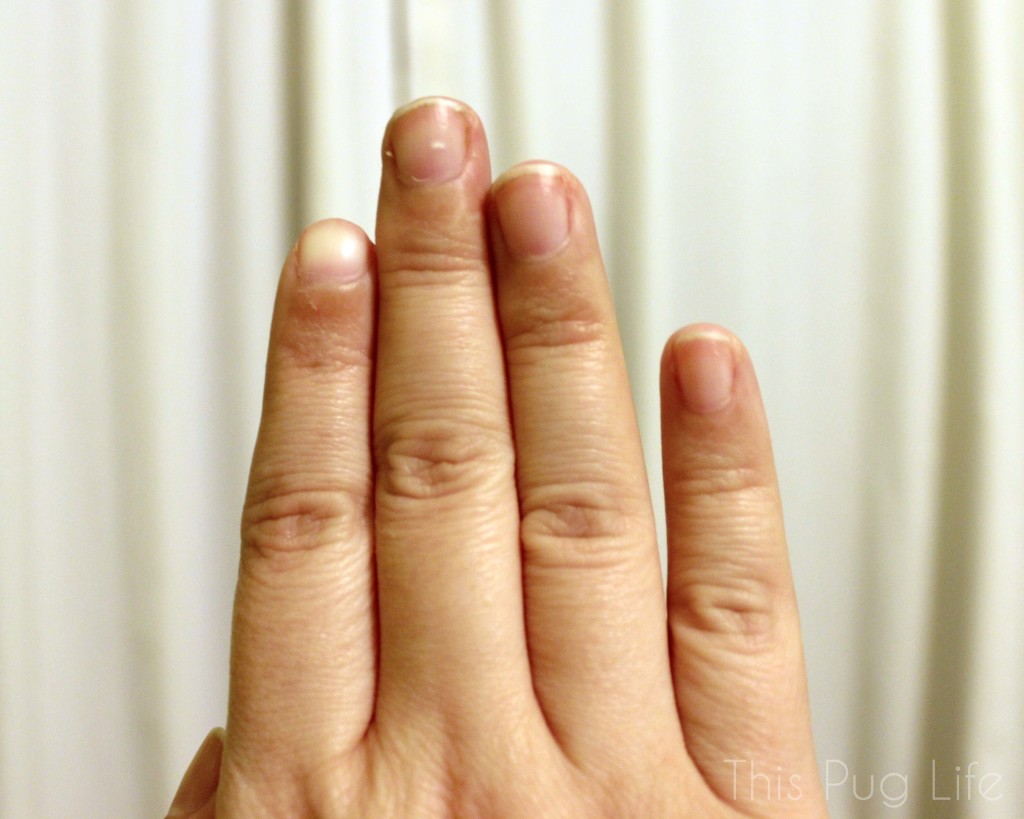 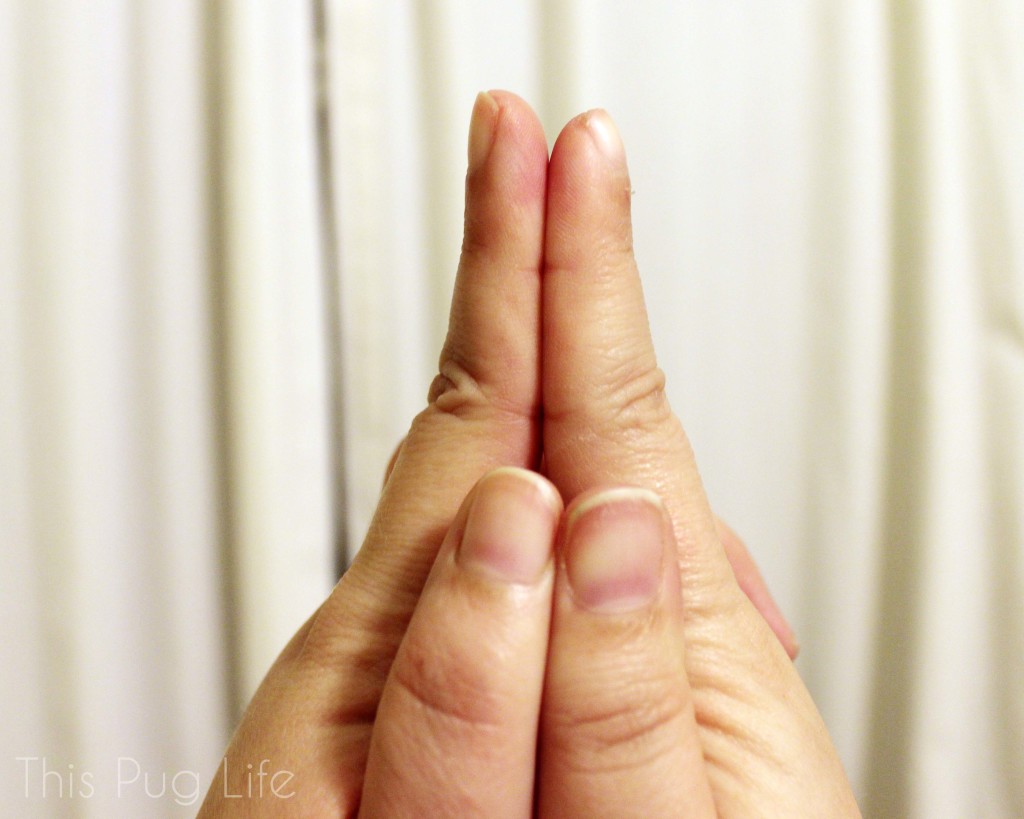 Despite my traumatic experience I am not afraid of dogs and I’m not scared of pit bull type dogs either. But, it has made me more cautious and to be more aware of body language and other signals that could indicate that two dogs aren’t going to be friendly with each other. I’ve noticed that with my mom’s crew, a fight is often preceded by playing that gets out of control – usually over a resource like bones or toys. Or general excitement like if they’re all barking and “guarding” the house from a stray cat or squirrel in the yard.

When dealing with meeting strange dogs, Sophia Yin’s Body Language chart can be helpful for knowing when you should back off and not force your dog to interact with another dog. Oy! The number of times I’ve seen a person insist that their dog just wants to “say hi” and won’t leave an obviously distressed dog alone is way too high! 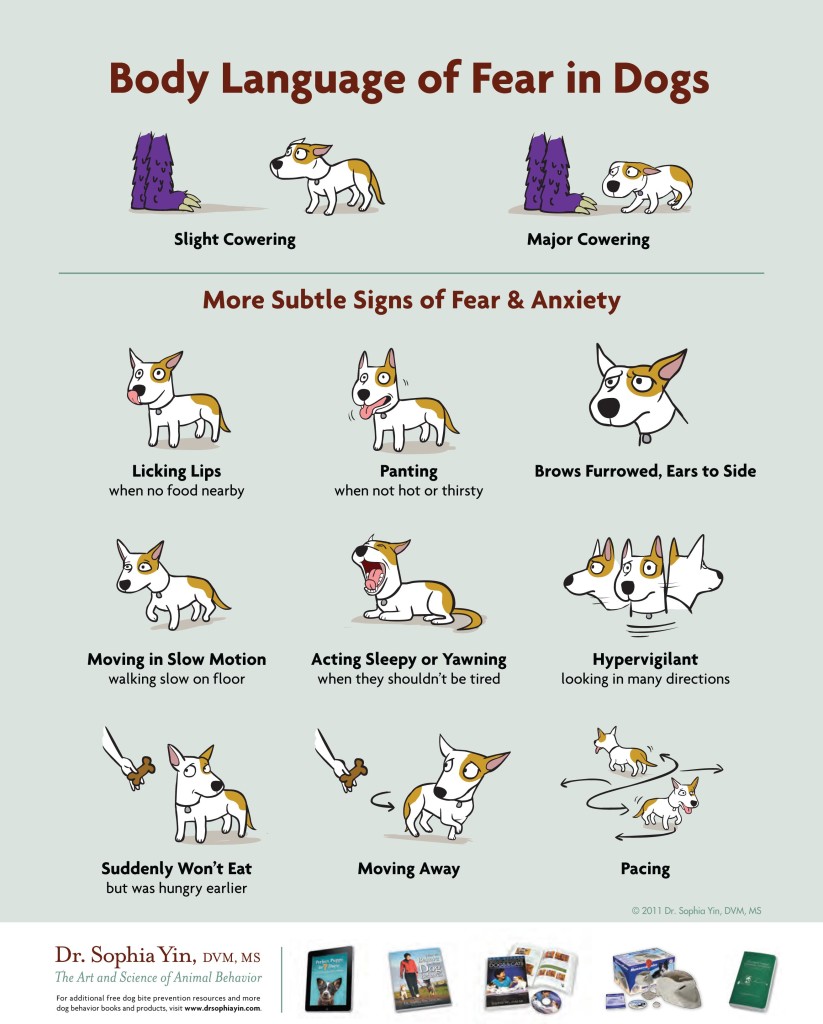 If you do find yourself in the presence of a dog fight, the ASPCA has some good tips on how to safely break it up.

1. Obviously, keep your hands away from their mouth! But also, don’t grab their collar either. They can turn their head and bite you without even realizing what they’re doing.

2. Have a plan in place if you live with multiple dogs. Even best friends can get into a scuffle. My mom keeps an air horn and a slip lead nearby in case of a fight. The air horn can startle them enough to stop, and the slip lead allows you to pull one away without grabbing their collar.

3. Stay calm. This is the hardest one because dog fights sound horrible. Going by the sounds alone you would think it was a complete bloodbath and often when everyone is separated it’s only minor bites and cuts.

4. If a water source is handy, throw water on them to startle them.

5. If you have to physically pull them apart, pull them by the base of their legs. Again, staying clear of their heads and mouths.

6. Once the dogs have been pulled apart, immediately separated them. They can tend to stay in fight or flight mode and go back at it if they’re not physically separated and left to cool down.

These are just some of the tips I personally use now. Visit the ASPCA website for more detailed instructions and tips.

I hope my story helps people have a plan in place in case they find themselves in this position in the future. Knowing so many people who have personally been bitten by breaking up their own dogs during a fight, I know it can go a long way in bite prevention. It’s a very frightening experience and one that people don’t talk about a lot and yet it happens more than you may think.