Even though I’ve never hidden my health problems, I’ve also never talked extensively about them either. I’m going through a rough time right now health-wise and I thought I’d give a health update to let you know where I’m at with my life.

First, a little background. As some of you may know, I have Crohn’s disease. I was diagnosed at 19 and had a really rough first year. I was on high doses of steroids and every couple of months when they would try to take me off I’d get super sick and end up back in the hospital. After a year of trying and failing to control it with medication we made the decision to do a bowel resection. It turned out I had an extremely infected portion of bowel that had twisted into itself and was never going to get better with meds alone. I’ve been free of major flares since that surgery 9 years ago but the long-term use of steroids did a lot of damage to my body, most notably to my foot and ankle joints.

I have pretty severe arthritis in my right foot and have pretty much chronic pain in my lower body. I actually just got a referral to a rheumatologist to find out if I have a secondary auto-immune condition.

Attending the BlogPaws Conference back in May was actually a big wake up call for me about my health. While I had an amazing time, it took a huge toll on my body to cram so much activity into each day. Hopefully I didn’t show it while in public but I felt close to passing out from exhaustion multiple times and as soon as I got back to my room I pretty much collapsed in pain.

I’ve also been dealing with chronic fatigue more recently, and while I deal with fatigue all the time, it’s never been this severe. It’s been distressing because with all of my other conditions whether it be mental or physical the one thing I’m still able to do is my blog and other online work but you can’t do that if you’re falling asleep at the keyboard. I haven’t been able to do much of anything much less get out of the house and to events I would normally cover on the blog. I came out of conference feeling the best ever career-wise so this has been a big let down.

I just felt compelled to share with all of you because one – I didn’t want to suffer in silence so to speak, and two – I want everyone to know any lack of content on the blog is not due to lack of interest. And if you made it this far here’s a pic of Pug for you. The only benefit of my health problems has been lots of extra snuggle time. 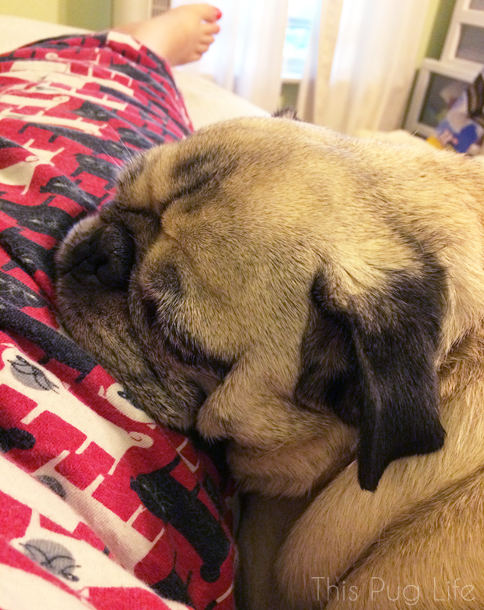 « My Eight Photos of Happiness » Insta-Friday #146