We’ve had some time to test out the items from the June Loot Pets crate and it’s time for a full review.

This month’s theme was “Dogtopia” to go along with the Loot Crate theme of Dystopia (I’m actually curious how they could have themed the pet crate around dystopia, to be honest). I was really excited about the theme, but I will admit that I was a little disappointed with the execution. I didn’t outright dislike anything I received, but like I mention in the video, it didn’t feel like it fit with the Loot Crate “geeky, pop culture” brand.

I feel like this is a case of “be careful what you wish for” because early on I hoped that they wouldn’t only curate officially licensed merchandise since some of it wasn’t the best quality or that unique. But, now they’ve gone the complete opposite direction and I’m missing the old artwork and the tie-ins to geek culture and movies/TV. 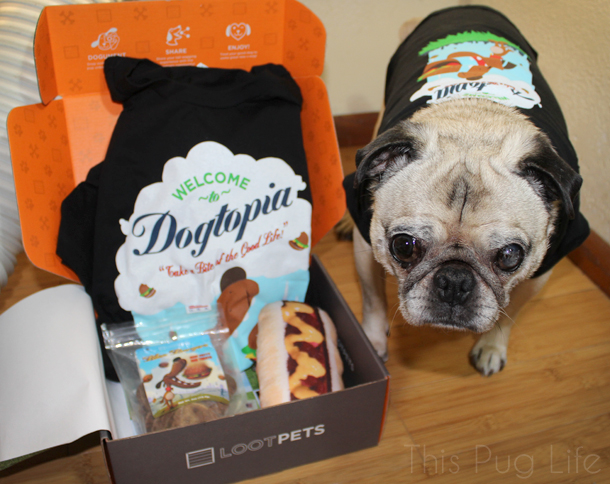 Our matching shirts this month featured a homegrown Loot Pets Dogtopia design, with cheeseburgers falling from the sky. I’ve been impressed with the quality of the shirts up until now, but the screen-printing on this one didn’t seem to be as good of quality as the rest. 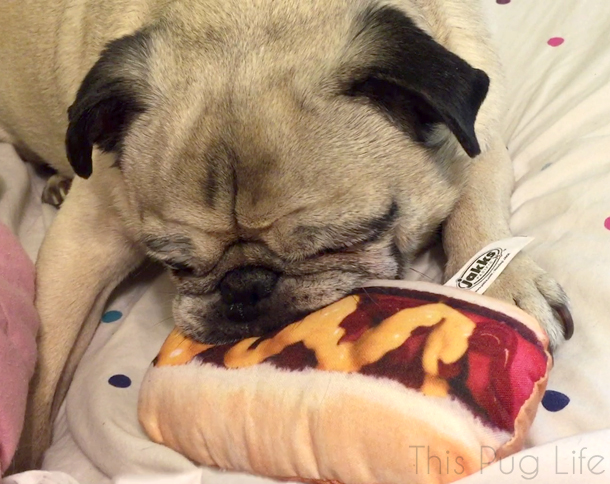 The toy this month was once again by the brand Jakks, the same as the bacon toy from April. Going by the trading cards, it appears you could have received one of three toys. The chili dog, a slice of pizza or a burger. The chili dog we received was a great size and shape for Pug’s little mouth and as usual, he enjoyed “killing” and then suckling on it.

While this toy boasts reinforced stitching, the fabric seems like it wouldn’t hold up to extremely destructive dogs. However, Pug is a sucker not a chewer, so it’s hard to test out the durability. 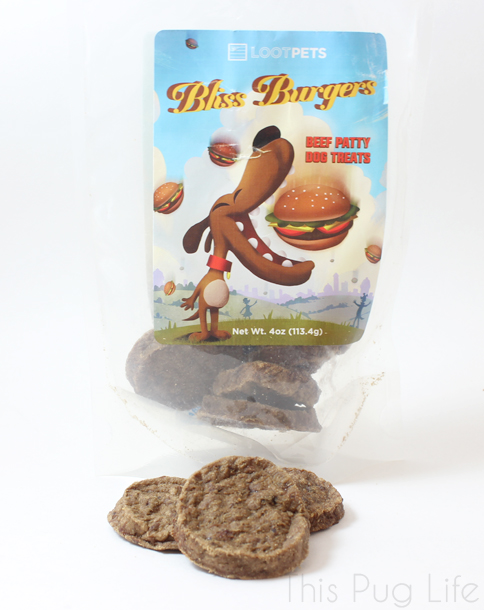 Pretty much every treat we’ve received thus far has been a hit, and this month’s Bliss Burgers were no exception. These were another limited ingredient offering:

These are basically soft beef jerky treats in a small burger shape. 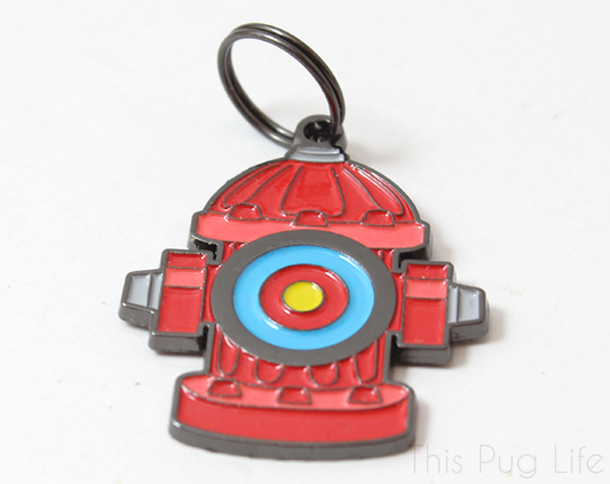 And last up was our dog tag of the month. This bright red fire hydrant was very appropriate for Dogtopia. Though, as cute as this is, it’s not terribly unique.

That’s it for June’s Loot Pets crate. Clearly, I was a little disappointed in the theme of this month’s goods. Everything was fine, it just didn’t strike me as particular unique or cool like so many other items we’ve received. But, you can’t win them all. And I’m definitely looking forward to next month’s “Futuristic” theme which featured more dog astronaut artwork!

Check my YouTube channel later this month for my unboxing of July’s Loot Pets and check back here for a full review! Or if you’d like to join in the fun you can order your own subscription and get 10% off with my code PUGLIFE.