The “main event” for Pugs Take Chicago was a public meetup at Lake Shore East dog park near Millenium Park. Now, I’m from the burbs and have never needed to use a dog park, so I have nothing to compare it to. But it seemed really nice. It was kind of sunken in the middle of a bunch of high-rise buildings, so it was protected from the wind and cold air off the lake. 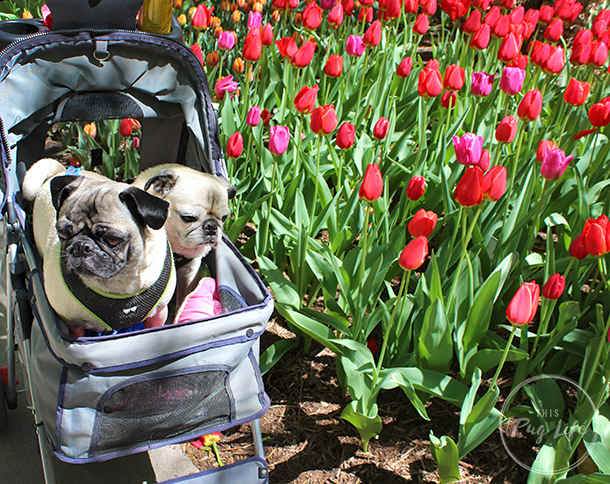 The whole area was surrounded by beautiful blooming tulips. There was a nice fountain that flowed down a little channel than ran through the center of the park, providing fresh drinking water for the dogs (I know that standing water can be an issue in dog parks, so I felt safe letting my guys drink from the “river”). 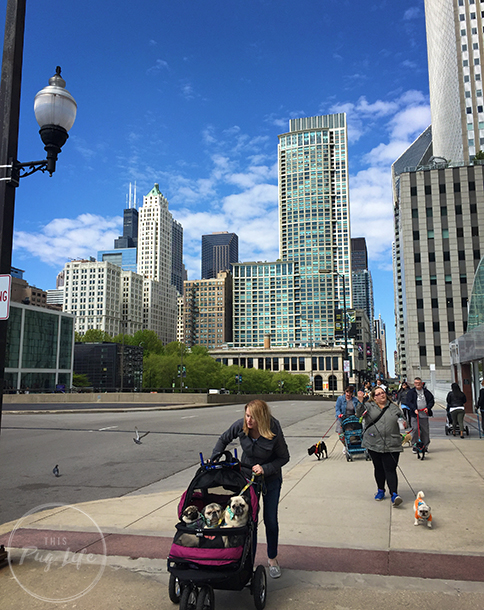 The park was a 30 minute walk from the hotel, so I headed down to the lobby early hoping to catch some others making the walk. Once we had a decent sized group we started to make our way toward the lake. We caused quite the commotion with our impromptu pug parade. People were stopping left and right to take photos and video. I kind of thought city folks would be hard to excite, but even they were wowed by a couple dozen pugs (many in strollers) marching through the city.

The funniest thing was hearing groups of people speaking foreign languages I couldn’t begin to decipher, but catching the word “pug” over and over! 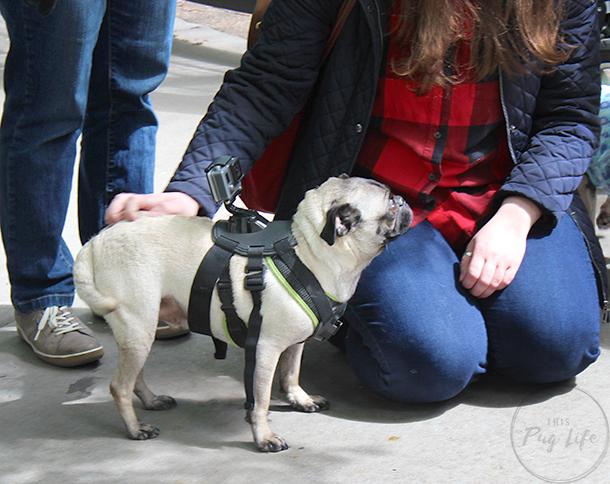 Once we arrived into the dog park I put the GoPro on Pugs and sent him on his way. He naturally ignored most of the dogs and immediately found humans to adore him. 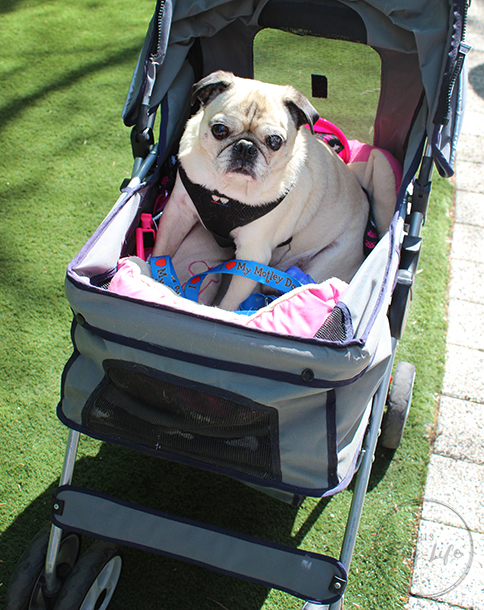 I wasn’t sure what Pug would do. He doesn’t get around that well and even in our backyard he usually does his business and then cries to come in. Boy, was I in for a surprise! 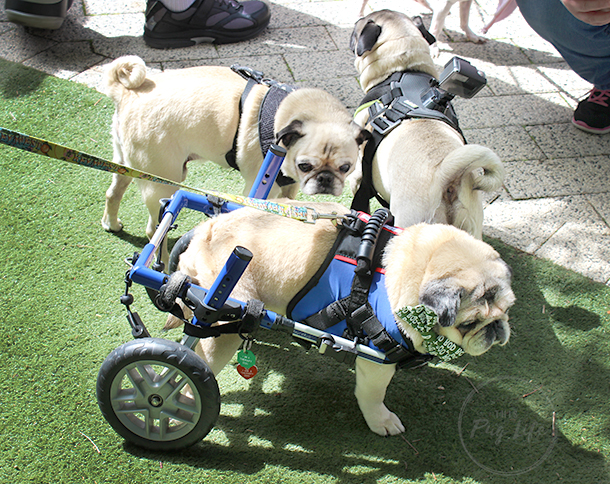 I took him out of the stroller and almost instantly he was off and running (well, his version of running). You’d never have known he normally has issues walking. I lost count of how many rounds of the park he made. On multiple occasions I had to search for him because he was off doing his own thing, mingling and meeting everyone. I was so happy I could have cried. I kept telling everyone that would listen “you don’t understand, he never does this”! 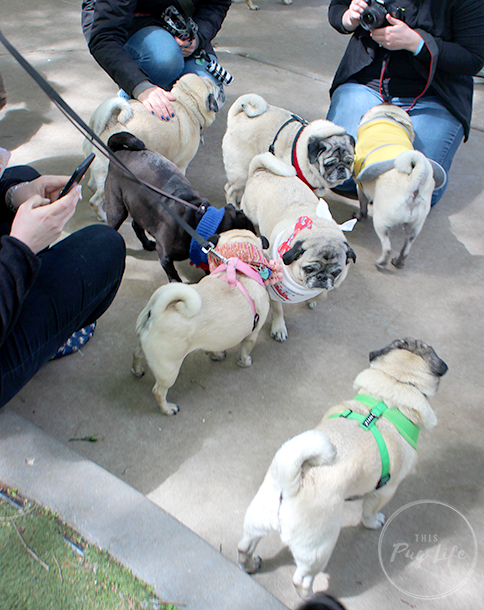 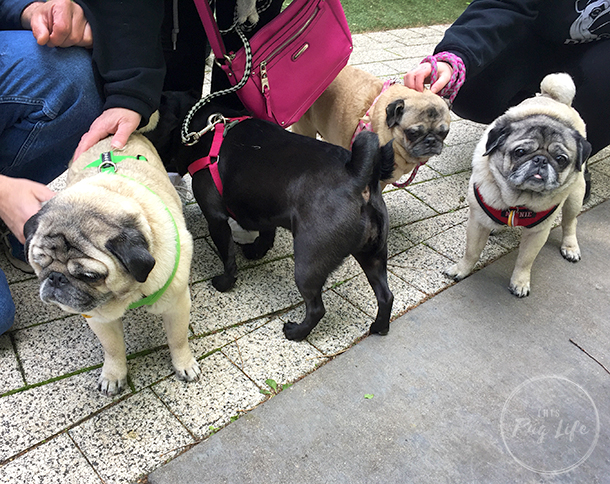 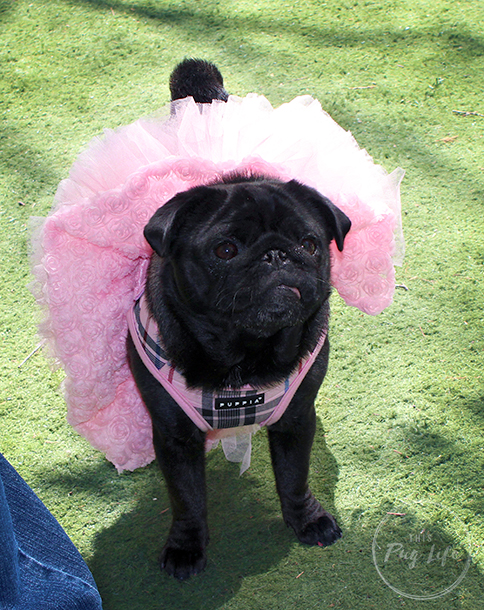 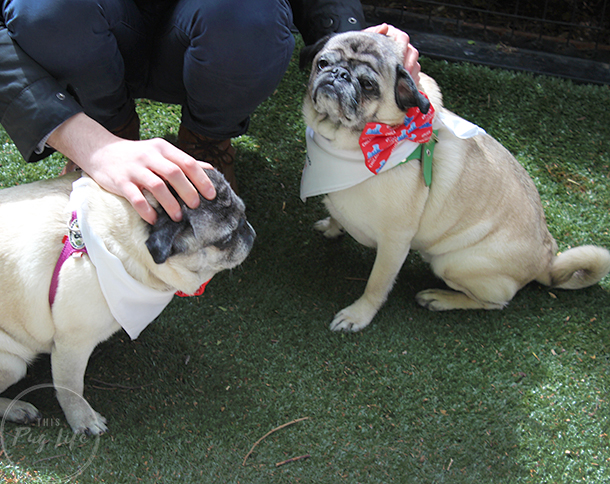 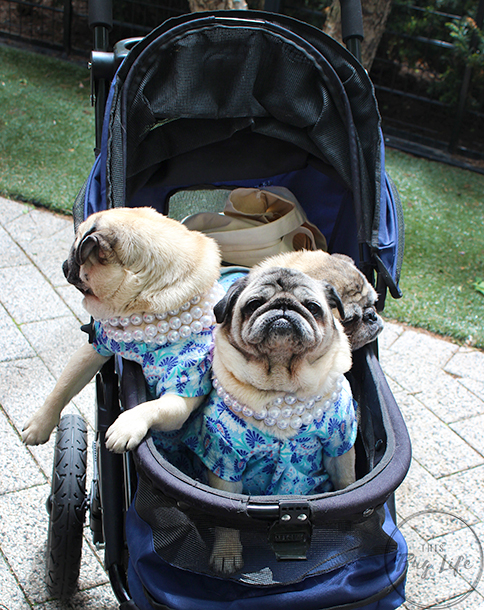 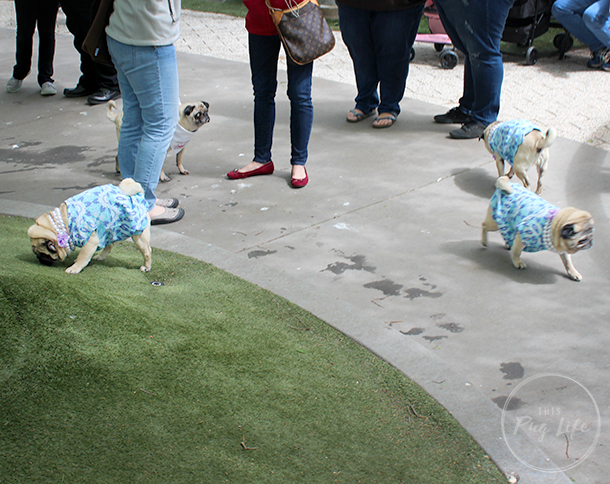 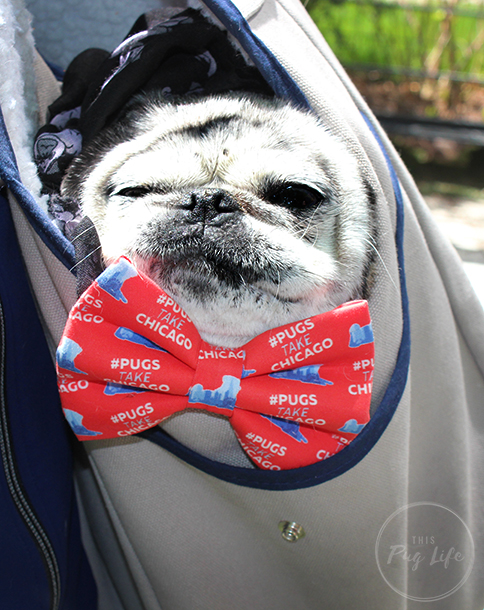 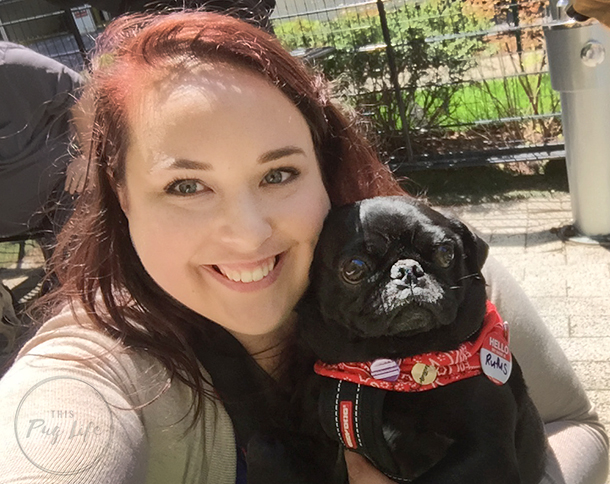 I couldn’t resist scooping up a few of my longtime online pug friends for a selfie. Sorry for manhandling you Rufus! 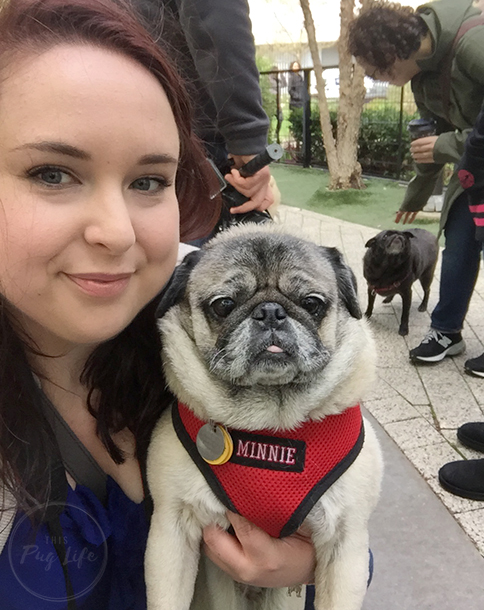 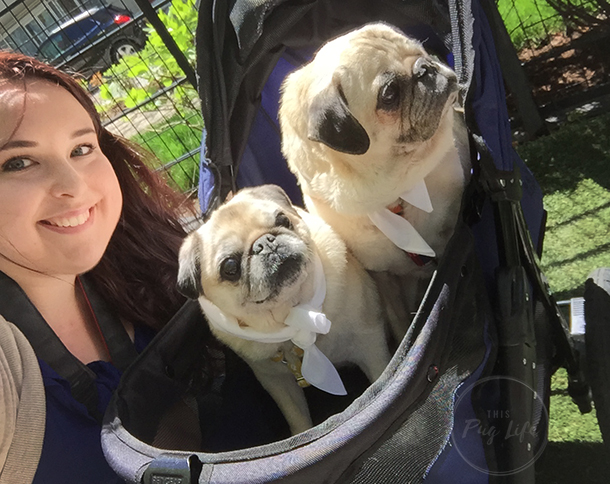 Look at the smize on Violet! 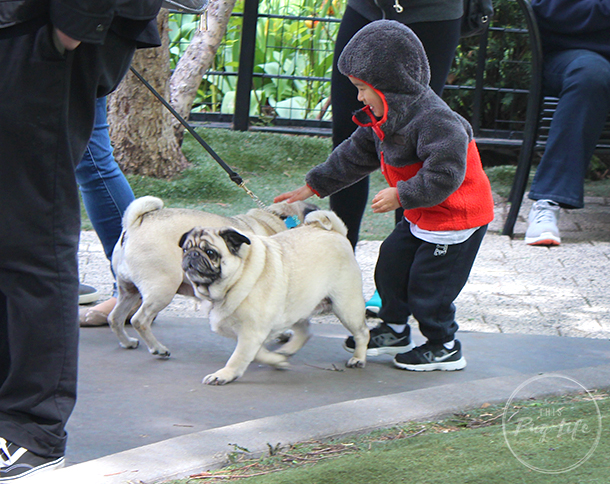 This kid represents what I would be doing if I wasn’t restraining myself. I did walk around with a stupid smile on my face for 2 full hours. I just held back from running after the pugs with glee (barely). 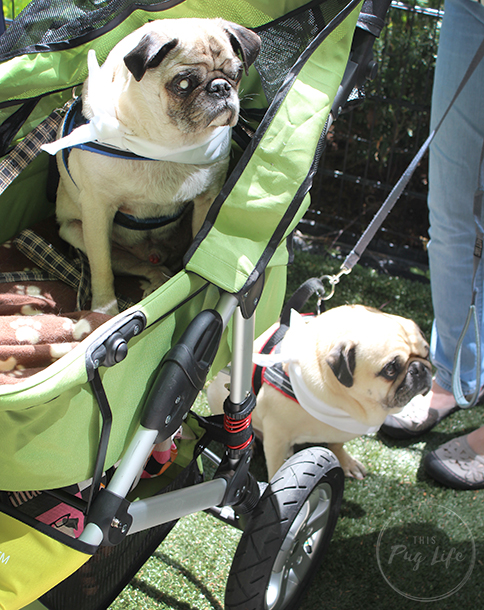 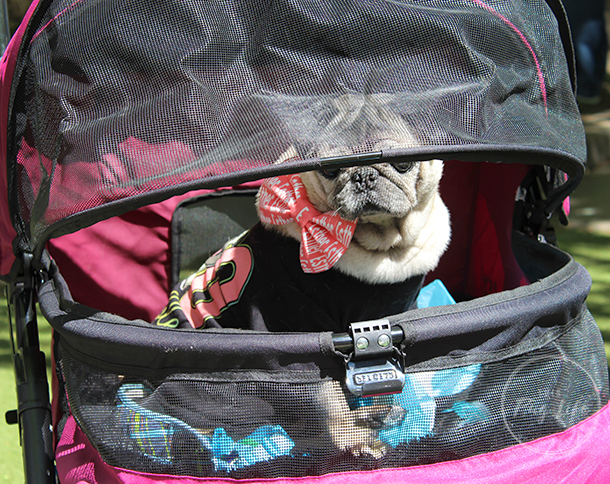 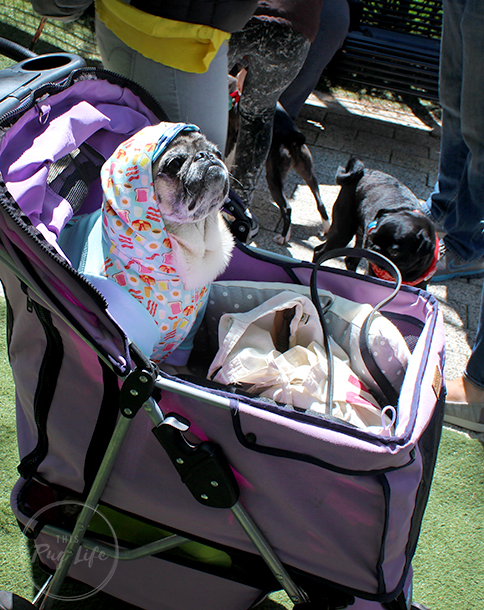 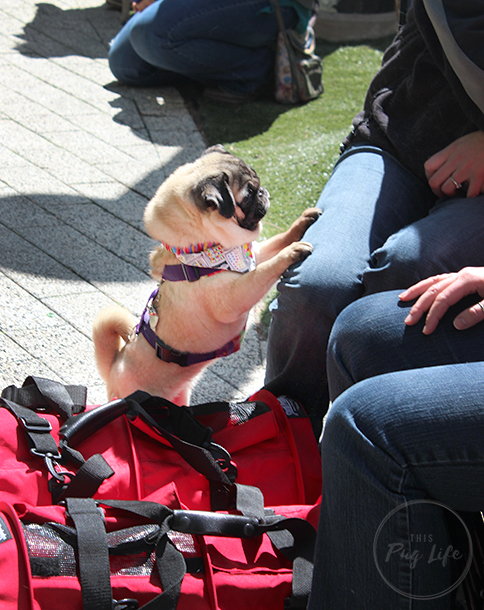 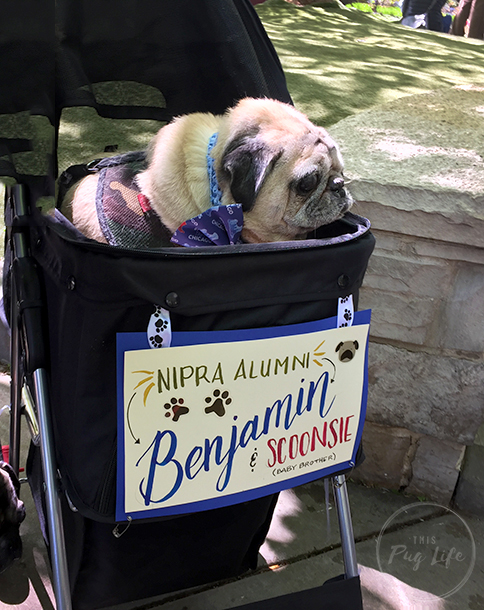 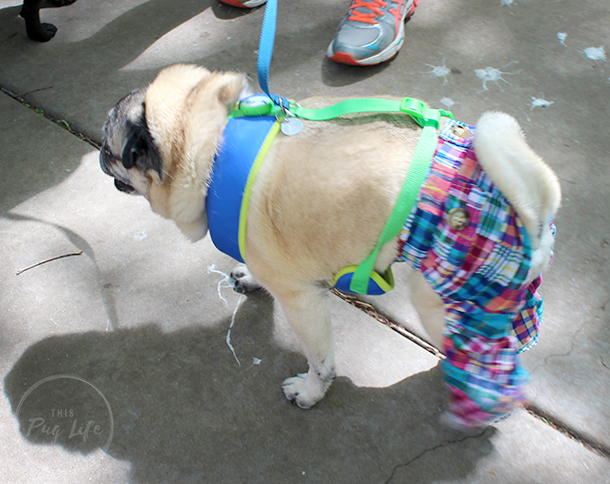 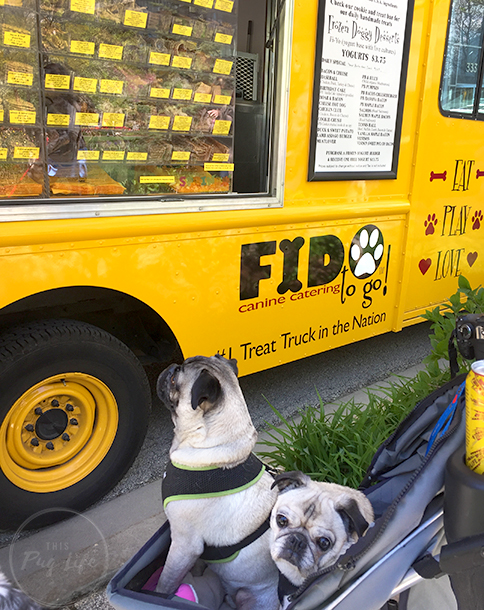 Toward the end of the event, I saw the Fido To Go treat truck pull up, and made a beeline to get in line. Violet and Timmy have raved about it and I knew I wanted to try their ‘famous’ pizza. 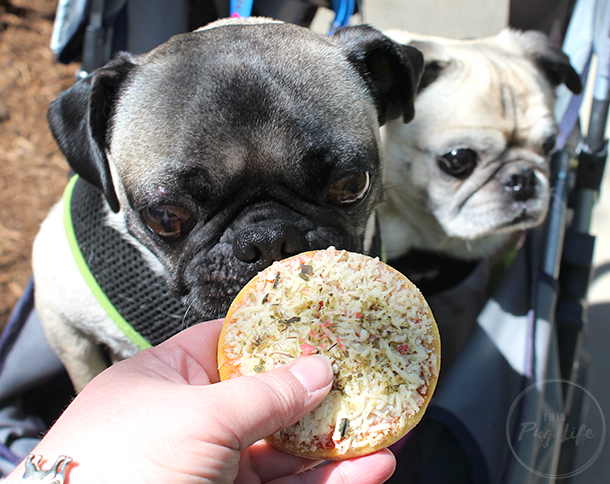 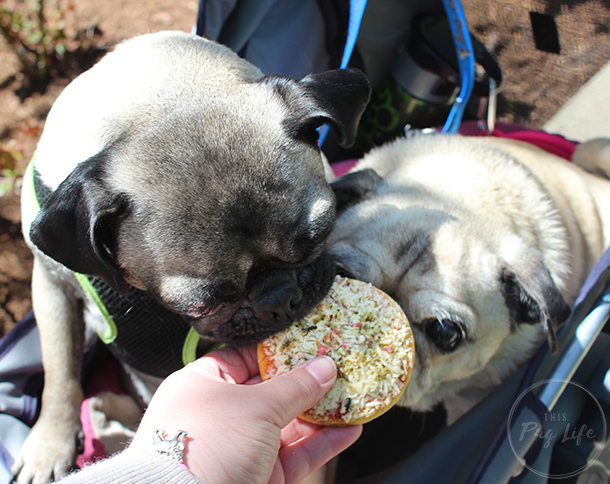 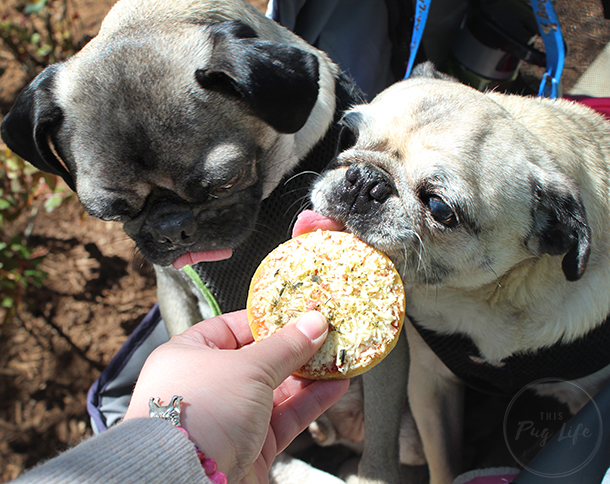 These little pizza treats smell just like the real thing, and were obviously a hit. Next time I’m in Chicago I’m definitely going to be following Fido To Go’s whereabouts, whether the pugs are traveling with me or not! 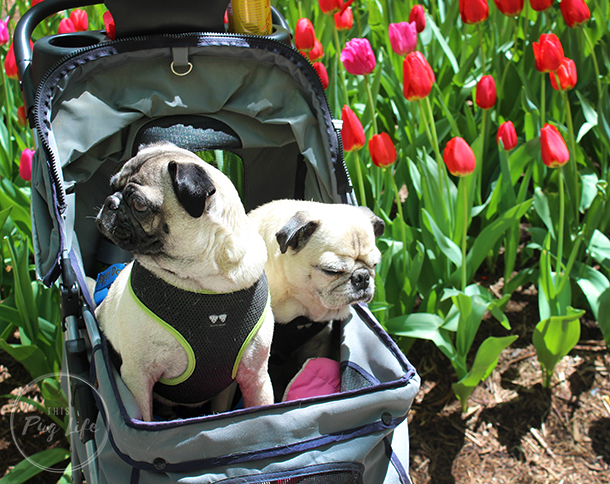 Once we had our treats and took a few photos in front of the tulips, we had just enough time to walk to our next event at Clark Street Ale House. I’ll have photos from that coming soon, and you can see many of our city pics along the way from Friday’s post.